Bombardier’s 75-plane Delta deal may be ‘beginning of the end’ for Boeing, Airbus dominance 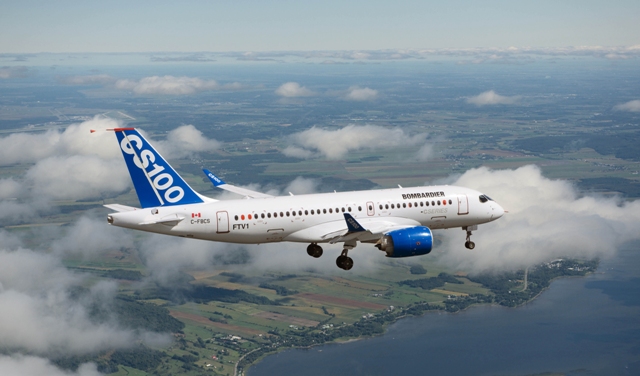 Bombardier locked in a firm order for 75 CS100 aircraft with Delta Airlines last month, an order that could be a turning point for the plane maker, as well as the aviation industry. PHOTO: Bombardier

NEW YORK—Bombardier Inc. may be poised to join the big leagues.

Though the Canadian plane and train maker has long outweighed its Canadian peers, it has never quite measured up to aviation industry mainstays Boeing Co. and Airbus Group. According to Russell Solomon, an analyst and senior vice-president of Moody’s Corporate Finance Group, that could be about to change.

“It’s going to take a good bit more time to fully develop, but the beginning of the end of the long-running Boeing/Airbus duopoly is finally upon us,” Solomon said in a new report.

For decades, Boeing and Airbus have largely competed against one another for large commercial plane contracts. But pointing to Bombardier’s “landmark” 75-plane CSeries deal with Delta Air Lines, the analyst said there is mounting evidence that the aviation industry is evolving and becoming more competitive.

“Boeing’s mid-sized 737 sales are keeping reasonably good pace, and the family as a whole is still the most widely sold aircraft of all time, but they have several competitors closing in,” Solomon said. “Airbus’ larger A320s are outselling Boeing by a wide margin, and with Bombardier and Embraer moving up with more competitive offerings in the lower end of the market, this could pose more problems for Boeing.”

The Moody’s analyst also noted the Canadian plane maker’s Delta deal was driven by a steep pricing discount and earlier availability of the jets. While Bombardier’s narrow-body CSeries program does not compete directly with Boeing’s or Airbus’ mainstream wide-body planes, Solomon said the deal could “add fuel to the fire” and create an environment for more aggressive price discounting.

After facing significant delays and cost overruns, Bombardier is scheduled to begin delivering its first CSeries aircraft this year.

At last year’s Paris Air Show, Airbus sales chief John Leahy took a shot at Bombardier’s little brother status, saying, “I don’t mean to insult Montreal in any way… [but] for the last couple years, I haven’t noticed that they’re much of a competitive threat to us or Boeing in the marketplace.”

With the CSeries program beginning to “chip away at their long-standing duopoly”—as Solomon put it—the Canadian manufacturer may force the world’s two leading plane makers to reassess.