As the Oshawa vehicle-assembly line terminates production this year, the automaker rolls out its auto parts plan for the facility 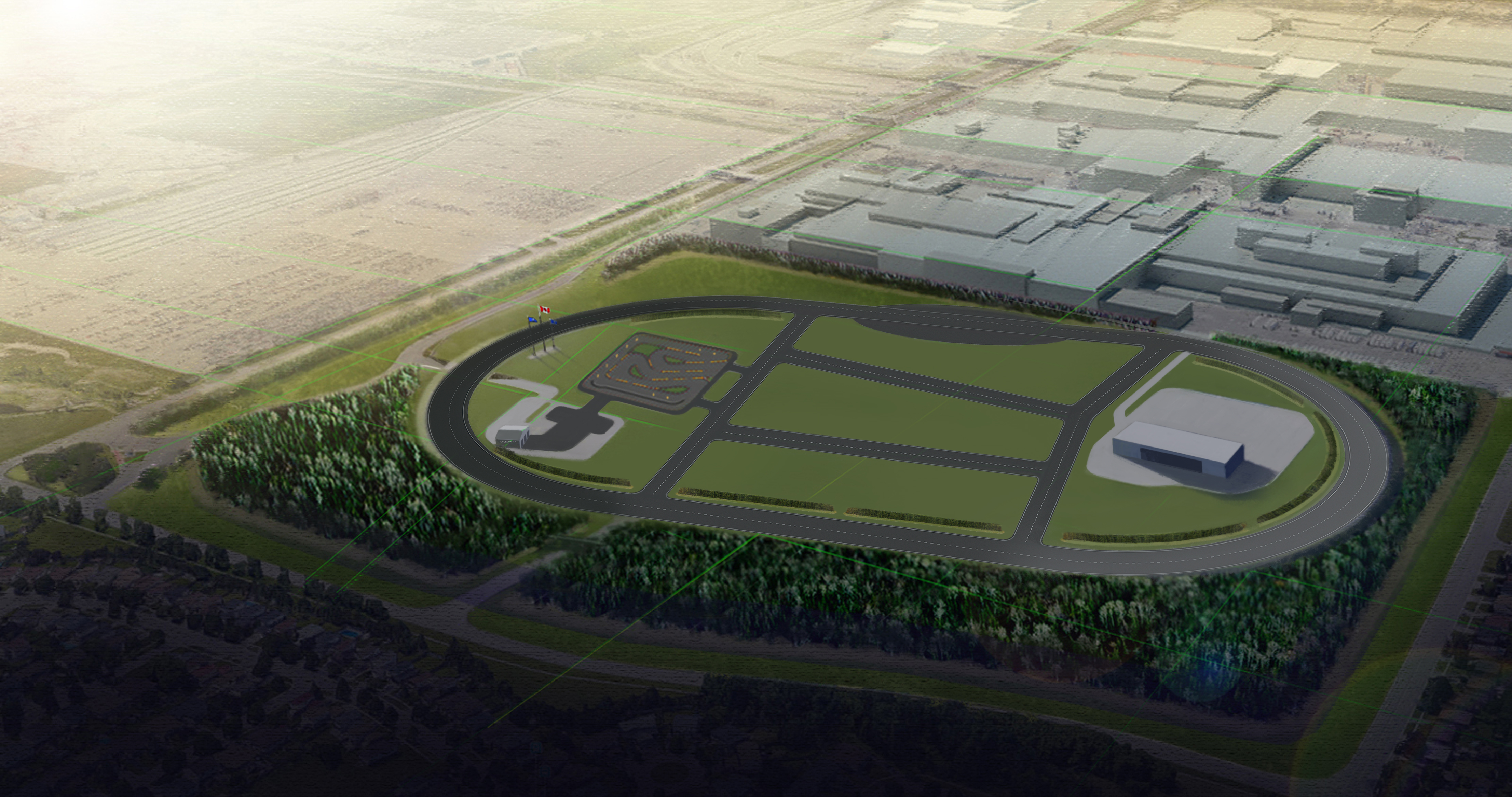 GM will convert part of the Oshawa Assembly Plant property into a test track for autonomous and advanced technology vehicles. PHOTO: GM Canada

With only a couple of weeks left before GM’s Oshawa vehicle-assembly line terminates production, the automaker remains undaunted about maintaining its footprint at the facility.

In part, that determination is underpinned by the Transformation Agreement GM Oshawa reached on May 8 with Unifor, Canada’s largest private-sector union representing the 2,600 hourly-paid workers at the Oshawa plant.

The terms of the settlement reached with the union are incontrovertible: General Motors Canada would be tasked with transitioning the GM Oshawa Assembly into a parts manufacturing operation, while 22 hectares of the facility would be converted into a test track for autonomous and other advanced vehicles. GM would also donate the three-acre Fenelon Park and the 87-acre McLaughlin Bay wildlife preserve to the City of Oshawa. Also part of the deal, affected employees would be offered relocations to other Ontario facilities, as well as “enhanced” retirement packages.

Whether the agreement is good news for Oshawa and the Durham Region is a subject of an ongoing dispute. The GM plant has been in the Oshawa community for 100 years and the plant’s transformation would by any measure be a watershed moment in the history of the community.

“It is special because we know the Oshawa plant is an iconic part of the Canadian automotive scene, and you can’t often separate the community of Oshawa from General Motors,” says David W. Paterson, vice president, corporate and environmental affairs, GM Canada. “We knew right from the start that we needed to think about the community as well. This was not something that was just about General Motors and its employees and its unions. It was about all of Oshawa and Durham region, really.”

But to regain the community’s confidence, GM Canada would at the very least need to make good on the agreement reached with the union and community in May.

The closure is part of GM’s global plan to cut costs and dedicate more resources to developing electric and autonomous vehicles. Meanwhile, as part of its agreement with Unifor, the automaker is investing in excess of C$170 million to transform the facility into a stamping and related sub-assembly business.

The tough reality of the transformation is that the new business would save only 300 of the 2,600 union jobs lost at the plant. The balance of GM’s Oshawa employees in need of alternative arrangements are subject to early retirement and job transitions.

But if Paterson would have it, and despite the challenges of managing a difficult situation, GM’s employees and the Oshawa community might want to view the transition as a glass-half-full situation. “As difficult as the situation was, an immense amount of good has come out of all the hard work that has gone into this effort,” Paterson says.

Chalk up the impetus to ensure employees receive a good transition package to the fact that GM needed to run the plant for another year. “We were still going to be producing cars and trucks right through to the end of this year,” says Paterson. “So, through all the noise, it was important to provide reassurance that there was a pathway forward for employees and their families. That was really important.”

Soon after the announcement of the plant’s closure, GM announced that the automaker would pay for any training employees required in their next job.

The automaker had one advantage it could use in fostering career support. Data on employees’ skill sets could be used to build an online portal for employees so they could match their skills with potential opportunities, as well as to gauge the level of training or upskilling that might be required, explains Paterson.

Once the news of the closure became public, about 45 local GTA employers came forward with more than 5,000 jobs, recalls Paterson. “Companies that had specific needs, including Ontario Power Generation and Bombardier, were literally lining up and coming in to do presentations to our workers,” he says.

The offer of training would dovetail naturally with community colleges and educational programs in the Oshawa vicinity as they already provide skills training services for many of the big employers in the Durham region. In addition, GM has worked with community partners – including Fleming College, Trent University and Centennial College – to create a series of job fairs. One employer, OPG, will likely require 2,000 workers to complete its Darlington refurbishment project, says Paterson.

In September, GM and Unifor, along with the provincial government, launched the Action Centre. Located on-site at the Oshawa GM plant, the one-stop shop for workers received $531,700 in funding through the government’s Rapid Re-Employment Training Service program.

“The action centre will provide individualized support for workers, help with things like writing resumes, assistance with finding other job opportunities, counselling and conversations about where they want to be in their future,” explained Monte McNaughton, provincial minister of Labour, Training and Skills Development. “This centre will be a one-stop shop for workers.”

The Oshawa plant currently operates two product lines producing the Chevrolet Equinox, Buick Regal, Chevrolet Impala, and Cadillac XTS. Once vehicle assembly comes to a standstill at the end of this year, the facility will be outfitted for making auto parts, representing a new stream of business.

Paterson explains the opportunity: “When you produce a model, like the Chevrolet Impala, and that Impala goes out of production, you have to have 10 years’ worth of parts. So, if someone like my daughter bumps into a pole in a parking lot – which happened last week – you need to have a part that’s available for the repairs. We’re going to make those parts for the Impala, which is going out of production here in Oshawa.”

While the facility will be outfitted to do sheet metal stamping and produce parts, an existing paint shop will be repurposed for initial coating of the parts. “We’re going to run that as a business that we can grow.”

GM is in discussions with some of its main suppliers about prospective new business, says Paterson, adding that there’s a measure of safety endemic to a manufacturing plant due to its capacity to extend operations beyond the life of the vehicles produced.

“The beauty of the business for us as a manufacturing plant is, while we’re not manufacturing vehicles, there’s a stability to the business because of the 10-year horizon,” says Paterson. “It’s actually a regulatory requirement. If you get a contract to do replacement parts for a vehicle that’s going out of production, it gives you effectively a 10-year horizon to make parts and extend the life of your business.”

Canada’s aging population, it’s impact on the labour force, the available skills in that labour force, along with the impact from globalization are at the heart of the “structural forces” Alexander refers to. And GM, much like the rest of the automotive manufacturing industry, is at a critical point where the rise of new technologies, digitization, automation, sustainability policies, as well as changing consumer preferences are driving disruption.

According to a McKinsey report, only about 1% of vehicles sold were equipped with basic partial-autonomous-driving technology in 2016. Today, 80% of the top 10 OEMs have plans for highly autonomous technology that will take to the road by 2025.

“Step back and think why these changes are happening in the first place; it is that the business is changing,” says Paterson. “We saw a rapid shift in the marketplace away from cars – which is largely what we were producing in Oshawa, namely, the Chevrolet Impala and Cadillac XTS frames – towards crossovers.”

With these changes come new opportunities, says Paterson, noting that, relative to other companies in Canada, GM has grown steadily for the past several years through software development in safety systems for lane keeping, automatic stopping of vehicles, as well as for self-driving vehicle technology.

GM’s undertaking to build a test track for advanced-vehicle technology will enable new work streams, allowing engineers to efficiently and safely prove and develop testing, says Paterson. “Once our people have developed a new safety system or a new Lidar system, we can go right across the street, put it on the track – right here in Oshawa.”

The forces driving change are not something you can make disappear, says Alexander. “You can’t put the technology genie back in the bottle. You’re actually going to have to deal with the fact that we’re going to have autonomous cars.”

Paterson reiterates: “And it’s not by accident that we’ve been stressing that this is really not a plant closure at all. This is a transformation.”