Who owns your patent?

In the realm of generating wealth from ideas, RIM (Blackberry) remains a Canadian unicorn. What will it take to get manufacturers to raise their IP savvy? 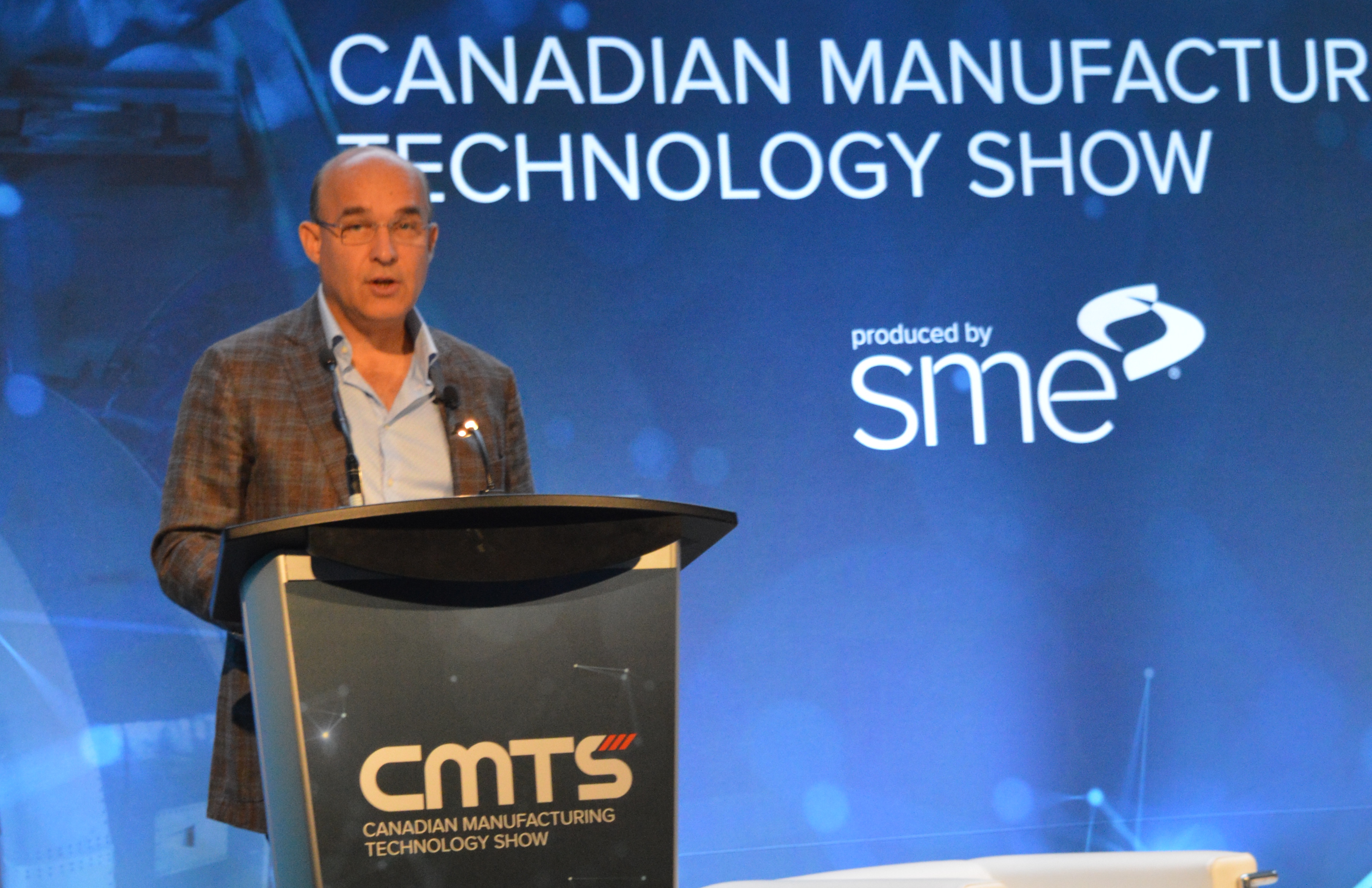 PHOTO: Jim Balsillie, chair of the Canadian Council of Innovators and former co-CEO of Research In Motion (Blackberry)/Rehana Begg

As Jim Balsillie prepares to voice his thoughts about the state of intellectual property in Canada, the audience perks up.

Not because they’re solely interested in a topic associated with elusive commodity trades, but they’re equally stoked to hear firsthand from the former chairman and co-CEO of Research In Motion (Blackberry), who knows a thing or two about scaling a company from an idea into a global business with $20-billion in global sales.

The fact that Balsillie reportedly re-mortgaged his home to invest $250,000 into a once tiny tech start-up in Waterloo, Ont., makes him all the more relatable to a group of small- and medium-sized business owners and senior decision-makers.

“IP and data have a direct impact on wealth and power at the firm level and nationally, which is why smart innovation countries and companies focus on owning and protecting these assets,” begins Balsillie, who currently chairs the Canadian Council of Innovators.

With the emergence of the data-driven economy, the strategic focus of business has shifted increasingly to generating, controlling and exploiting data assets, as well the valuable IP developed on top of the data assets through the application of artificial intelligence and machine learning, Balsillie says. “The digital transformation is being turbocharged by a big data tsunami sourced from a vast array of sensors that form the internet of things.”

Balsillie is a keynote speaker at Canada’s largest manufacturing event, the Canadian Manufacturing Technology Show (CMTS 2019 was held October 4 -7), and he is delivering a clear and deliberate wake-up call: Only 2% of Canadian SMEs own IPs and that number needs to grow dramatically if Canadian manufacturing businesses are to survive and thrive.

His rationale: Rapid progress in machine learning is driving the emergence of a geopolitical reality known as “AI nationalism” or “techno-nationalism.” Since advanced countries now view machine learning as general-purpose technology that will affect all sectors and parts of society, Canadians should expect machine learning to be a competitive element in the structure of all manufacturing and sub-sectors.

“There’s a global race currently underway by large firms and nation states to own critical IP, especially for key emerging areas such as blockchain, AI and machine learning,” says Balsillie, noting that there have been 226,000 AI patents filed worldwide since 2000. In the competition to dominate, China leads the pack, he says. “Last year, China filed more patents than the U.S. EU, Japan and South Korea combined.”

Such broad threats for companies to build their IP literacy have never been more prevalent.

“IBM recently estimated that 90% of all the world’s data has been created in the previous three years. This shift is unprecedented in terms of prohibiting manufacturers from capitalizing on the vast amounts of data and protecting from strategic threats,” Balsillie says.

To provide a sense of scale, he refers to a Statistics Canada report, which estimates the value of Canada’s data stock assets is up to $218 Billion. “This valuation is based on cost inputs that create the data, so the real market value, if properly harnessed, is undoubtedly much higher.” 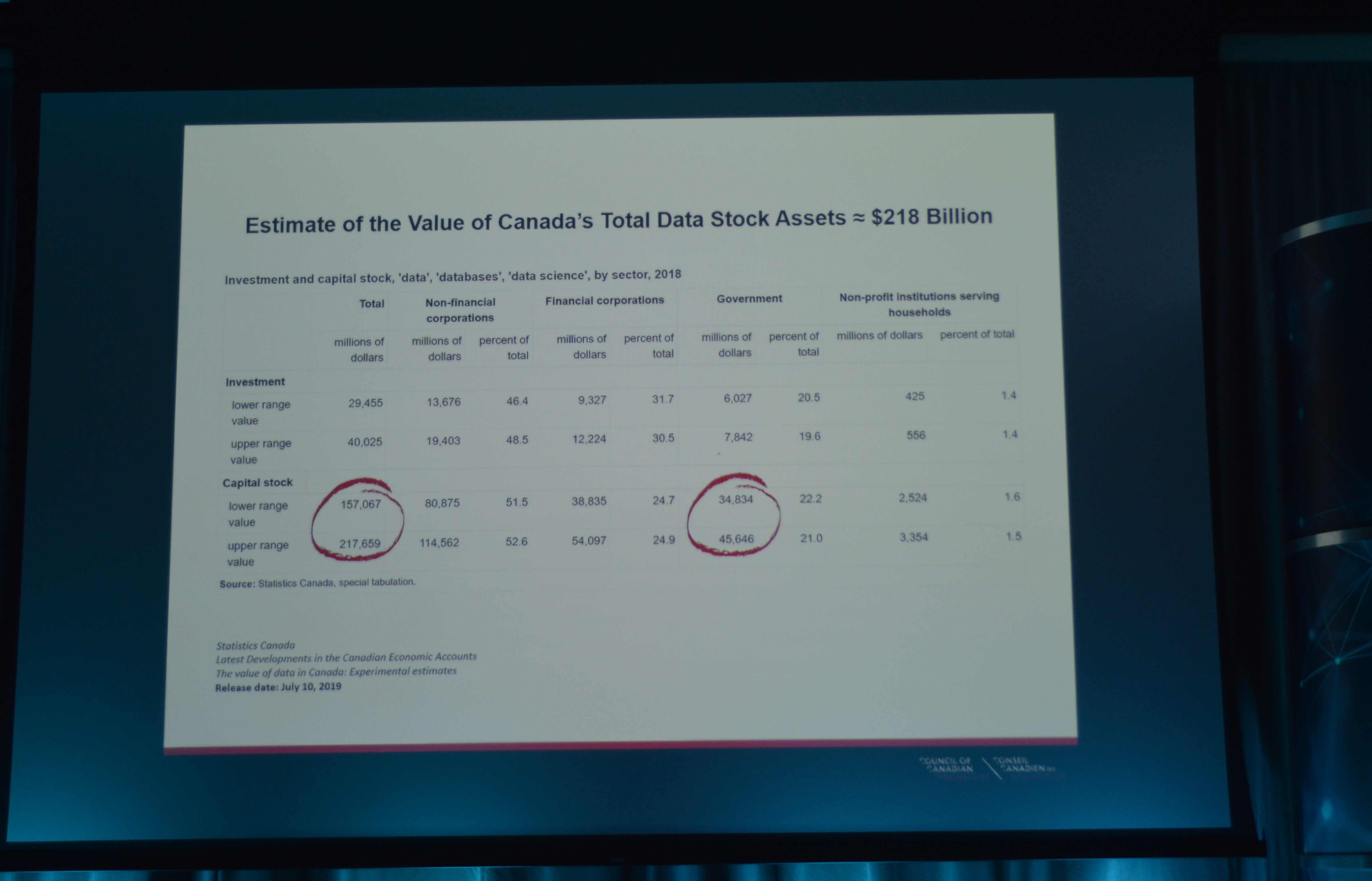 PHOTO: Statistics Canada reveals the value of Canada’s data stock assets is up to $218 Billion/Rehana Begg

How to get started on a “how-to” strategy

But it’s one thing to have an intention and another to know how to become IP-savvy while expanding and growing the business, says Peter Cowan, IP advisor and founder of Northworks IP, who led a Q&A session following the keynote address.

The most important aspects are to develop capacity and knowledge, recommends Balisillie, who has consulted with about 180 entities that are potentially engaged in funding, such as research institutions, incubators and technology transfer offices. To get started, businesses can take advantage of tools such as those provided by the Canadian Intellectual Property Office (CIPO) and the Innovation Asset Collective.

Another piece of advice is to “know the spice rack.” Intellectual property consists of six general categories of IP, or six ways to own IP, that you can use in your commercialization strategies. The categories are: design patents, utility patents, trademarks, copyright, trade secrets and contracts. “Think of these as different spices when creating a good meal. Mix and match them to varying degrees according to what you seek to create.”

When it comes to company culture, distinctive technologies allow businesses to shift thinking, and IP data will further enable that, says Balsillie, who recently finished his term as chair at EDC’s cleantech granting agency. He says that device companies are seeing data as a strategic driver in the business and can help transform a company into a service business.

That’s what RIM did. “We were just some simple folks that took an idea to $20 Billion over 20 years by navigating this terrain.”

Yet, for SMEs looking to commercialize and scale up in Canada, there remains a disconnect between their innovation potential and their propensity to develop and protect innovations, argues Balsillie.

Research on the impact of IP on SMEs reveals that while non-resident industrial design filings at CIPO have grown 69% in the last decade, Canadian filings at home and abroad remained relatively static since 2010.

It’s time for Canadians – companies and government – to benefit by shedding their “stubborn blindfold thinking” and take lessons from what successful organizations are doing around the world, says Balsillie, who has done business in roughly 160 countries.

Still, in the realm of generating wealth from ideas SMEs can take heart. There is recognition at the policy level of a market failure with respect to supporting businesses in their efforts to protect their IP, acknowledges Balsillie. A growing number of public policy initiatives and tools are being developed to help businesses, including CIPO, the Intellectual Property Institute of Canada and Council of Canadian Innovators.

And last year, the federal government announced the IP Strategy, promising $85.3 million over five years with $10 million yearly after that to support the strategy. IP awareness and education is among the top priorities of the strategy, and a decent starting point for bridging the knowledge gap and spurring innovation from the grassroots.

Those who are critical of the method and mechanism of implementing a macroeconomic strategy – including Balsillie – say governments continue to pour cash into research at the expense of commercialization but that more resources are needed.

“Our universities generate 4% of the world’s academic papers on cleantech for agriculture. Sound pretty good for a population? We own 0.03% of patents filed on that. We under-rotate by 99%. By the time it leaves our universities, there’s nothing there to utilize… There has to be more centralized resources – to colleges and universities, but also to the ecosystem of accelerators and incubators and to the SMEs itself.”

Balsillie’s bottom line advice for SMEs? “Get your IP.”