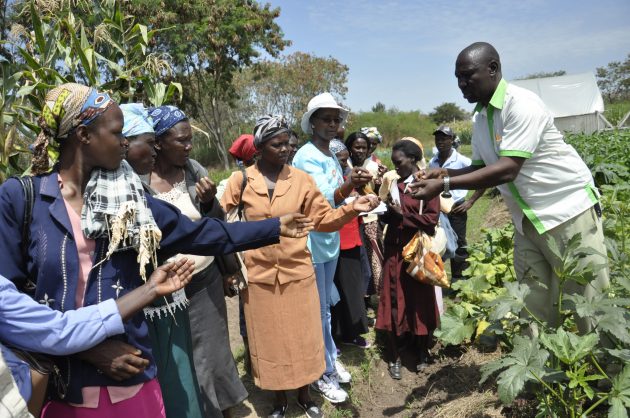 The idea that the effects of climate change hit women and girls harder than men and boys is becoming more widely accepted.

This is a reality borne of the simple fact that in places where the scales tip considerably farther in favour of the male population, the poorer and more vulnerable females will usually be the last to get help in the wake of droughts, floods, or other major climate events.

But the idea that levelling the scales will help curb emissions – that gender equality is among the top 10 ways to slow down climate change – is an idea that deserves more attention.

It’s one Katharine Wilkinson, vice president of communications and engagement at Project Drawdown, has been spreading at every opportunity. She recently made her pitch as a keynote speaker at the 2019 Cleantech Forum San Francisco, which is when she opened my eyes to the theory.

The solutions Project Drawdown identifies are best practices and technologies already in hand – they’re not ideas or dreams, they exist.

They’re in line with what the cleantech team at Export Development Canada has been seeing with some of our newer customers: clean and renewable energy, reducing waste, growing food in good ways and equity for girls and women.

It’s that last one that raised eyebrows during her talk, so she explained the three parts to the concept: first, women “smallholders,” the term for those who farm on small plots of land, need to be empowered. Next, women and girls across the world need access to education. And finally, females must have access to high-quality reproductive health care.

Afford these rights to women, and the world can be spared billions of tons of greenhouse gas emissions, Wilkinson says.

The three prongs of this approach are interwoven, each depending on and reinforcing the others. Together, they result in slower population growth and a reduced need for clearcutting of forests.

To get the full picture, let’s look at a few facts.

Women, as The World Bank Group puts it, are the backbone of rural economies – especially those in developing countries.

Women make up almost half of the world’s farmers, have been acting as heads in an increasing number of households, and continue to be the primary caregivers in their families and communities.

“They are the human link between the farm and the table,” The World Bank Group wrote in a report on International Women’s Day 2017.

The Food and Agriculture Organization of the United Nations pegs the output of women farmers in lower income countries at 60 to 80 per cent of food produced.

Despite this – or perhaps because of this – there is a wide gap between the number of girls and the number of boys who attend school.

According to the UNESCO Institute for Statistics, 16 million girls will never step foot in a classroom, and women account for two-thirds of the 750 million adults who lack basic literary skills.

A July 2018 report painted an even dimmer picture of female education; about 132 million girls around the globe aged six to 17 years old don’t attend school, and three-quarters of those are in their adolescence, according to the report from The World Bank.

In short, females worldwide have less money and fewer rights and freedoms than males.

If these disparities were narrowed – if women had more access to education and if the laws and biases rooted in sexism holding female smallholders back crumbled away – the world’s climate challenge would be smaller, Wilkinson says.

“Women and girls play a crucial role in the fight against climate change, and it is essential to make sure that this role is not only fully understood, but incorporated into the Sustainable Development Goals,” a 2018 UN report found.

Like Wilkinson, the UN report highlights that female agricultural workers face severe inequalities in their access to land, credit and critical inputs such as fertilizers, irrigation, technology, information and markets.

More food coming from existing farm plots will reduce the need for clearcutting forests to create more farm land – an activity that requires fossil fuels while simultaneously eliminating the trees that absorb those very emissions as well as the carbon dioxide humans exhale.

Addressing inequity in farming could prevent about 2 billion tons of carbon dioxide emissions between now and 2050, Project Drawdown estimates.

At the same time, educating women will help them become more empowered to make their own decisions – in business and at home – which will help curb population growth and, again, reduce the need to create more food-producing fields. Studies have shown that women with more years of education tend to marry later and have fewer children.

“One by one, the right to go to school impacts how many human beings live on this planet,” Wilkinson said. “That’s not why girls should be educated, but it’s a meaningful outcome.”

Hand-in-hand with general education is reproductive rights and giving women the choice to have kids when, and if, they want.

According to the World Health Organization, there are 214 million women of reproductive age in developing countries who want to avoid pregnancy but aren’t using a modern contraceptive.

A side effect of affording women this right and access is one billion fewer people living on Earth than if nothing changed, according to Project Drawdown estimates. That’s one billion fewer mouths to feed, people to transport, house and clothe, which could all translate to avoiding 120 billion tons of emissions.

FinDev Canada, an EDC subsidiary focused on financing private sector initiatives in emerging markets, applies a gender lens through all its investments, including those in the green growth sector.

“Encouraging women’s participation in the green economy – whether as workers, entrepreneurs, or community members – is key to the success of those initiatives,” said Suzanne Gaboury FinDev Canada’s chief investment officer.

“Further, however, it is a way to support the economic empowerment of women through sustainable jobs, business opportunities and other income-generating activities.”

EDC understands the critical need to support cleantech and the many exceptional women innovating in that space.

Just this year, we invested $1 million into P&P Optica, a female-founded Canadian firm that accurately sorts fresh foods on production lines for nutrition and safety, putting better-quality food on our tables and results in less waste.

Another example is our support for Clear Blue Technologies, also female-founded and led, which provides clean energy solutions to developing nations.

“When women succeed, so too do society and the economy,” said Catherine Decarie, senior vice president of corporate affairs at EDC. “Acknowledging the unique challenges women entrepreneurs face is a critical first step to increasing their participation in trade. That’s why EDC is aiming to support more women-owned and led businesses, partnering with the federal government’s Women Entrepreneur Strategy, and actively promoting the success of women entrepreneurs.”

All this doesn’t mean the weight of fixing the climate problem rests on the shoulders of women and girls, Wilkinson said.

“This doesn’t mean women and girls are responsible for fixing everything,” she said. “Though we probably will.”