Canada is witnessing more thunderstorms than ever before

Continuing to increase the length and quality of our national severe and extreme storm event database is needed to better understand such changes. 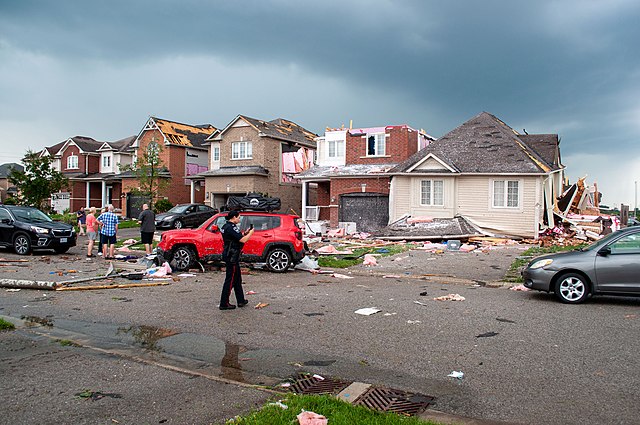 Residents in eastern Ontario are still recovering after a tornado-producing thunderstorm left a path of destruction over 55 kilometres long and up to 1,400 metres wide in July.

Such thunderstorms, and the damage they leave behind, can have deep and far-reaching impacts on society and the economy, and they are only increasing.

In Canada, the new normal for yearly insured catastrophic losses has reached $2 billion — a significant increase from the $422 million per year between 1983 and 2008 — and a significant chunk of that is from thunderstorm-related severe and extreme weather.

We at the Northern Tornadoes Project and the recently launched offshoot — The Northern Hail Project — are often asked whether these severe and extreme weather events are on the rise, and if this has anything to do with manmade climate change? The simple answer is: it’s complicated.

The difference between severe and extreme

Severe thunderstorms occur in Canada every year, bringing with them large hail, damaging downburst winds, intense rainfall and tornadoes. More rare and of even greater concern are extreme weather events — with their size, intensity or even time of year well beyond what is typically expected based on past observations.

Extreme weather conditions include tornadoes causing damage rated EF3-EF5 and significant hail of over five centimetres in diameter. Extreme weather can also arise when large hail accompanies downburst winds — increasing the hailstone impact energy — or when a long-lived thunderstorm system results in a derecho, which is a cluster of downbursts (and sometimes embedded tornadoes) resulting in intense damage over hundreds of kilometres.

In September 2018, for example, a tornado outbreak in the National Capital Region caused catastrophic damage resulting in over $300 million in insured losses. It is also the latest in the year that a tornado outbreak with up to EF3 damage has been recorded in Canada.

In June 2020, Calgary experienced Canada’s first billion-dollar hailstorm and fourth costliest natural disaster on record, with insured losses of $1.3 billion. The derecho in May 2022 that mainly affected southern Ontario took 12 lives, with early estimates of insured losses close to $900 million. And that’s just over the last four years.

How can we detect these trends?

Such events and their impacts cannot be adequately assessed and documented using standard operational weather observation platforms such as radar and surface weather stations.

Tornado tracks and hailswaths are inherently narrow and often pass between stations. Radar can capture some of the key meteorology, but not the impacts on the ground.

Comprehensive storm surveys by weather and engineering experts are required to fully assess and document the meteorology and its physical impacts through what we call an “event-based approach”. In fact, we recently added a social science component to such investigations to better capture the impacts on people and communities. The living database that results from these storm surveys can always be updated as new information is discovered.

This approach allowed the Northern Tornadoes Project to uncover one of the largest recorded tornado outbreaks in Canadian history — 23 tornadoes over two days in Québec — and increase the number of tornadoes documented across Canada each year. It has also allowed the new Northern Hail Project to recover and document Canada’s largest hailstone on Aug. 1, 2022.

The greater the length and better the quality of a national database of these events, the more likely it is that any severe and extreme storm trends will be detected.

Some progress has been made

The tornado data for Southern Ontario is of sufficient length and quality to allow us to begin to look for trends. A 2022 study found that the annual number of tornadoes recorded there since 1875 has grown substantially. But that is mainly due to an increase in weak tornadoes — ones that might have gone unreported in the past but now fail to escape the attention of the expanding population with consumer-grade cameras at the ready and access to social media for sharing.

The same study found, however, that tornadoes rated F/EF2+ in southern Ontario occurred gradually later in the year since 1875, now peaking in late summer rather than early summer.

Meanwhile, in the U.S., studies have shown that tornadoes may be occurring in bigger clusters and starting to shift eastward – away from the Great Plains and into more populated areas.

In all cases, clear connections to man-made climate change have not yet been established. It is also yet unknown whether extreme storms are changing in ways that are different from severe storms. But it’s still early and research in this area is growing rapidly.

While storm trends are studied, prepare for increased impacts

Canadians are recording and sharing images and experiences of severe and extreme storms more than ever before, increasing the documentation of these events. As the population continues to grow and spread out, the damage and losses caused by thunderstorms will continue to grow.

At the same time, we are learning more about changing storm patterns and possible connections to climate change. Continuing to increase the length and quality of our national severe and extreme storm event database is needed to better understand such changes.

In the meantime, developing adaptation strategies to ensure resiliency and to lessen the impact of inevitable damaging storms is becoming increasingly important. Improving upon building codes and other policies to promote more resilient buildings and communities is urgently needed to better protect the lives and property of Canadians.


Related Stories
Alberta mopping up after storm that brought heavy rain, hail and tornadoes
There wasn’t an app for that? Environment Canada launches its own weather app
Baloney Meter: is climate change increasing the cost of insurance in Canada?
Federal government releases report showing the impacts of climate change on industry