U.S. president stirred fresh controversy Wednesday when a transcript of his call with Mexico's Enrique Pena Nieto emerged; a White House official said the talk was "constructive," but Trump's signature bombast was prevalent

February 2, 2017  by Vivian Salama and Richard Lardner, The Associated Press 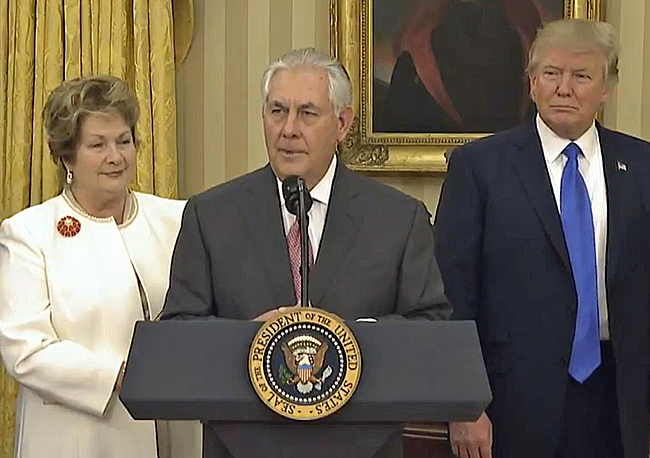 WASHINGTON—President Donald Trump warned with his Mexican counterpart that he was ready to send U.S. troops to stop “bad hombres down there” unless the Mexican military does more to control them—comments the White House described as “lighthearted.”

The White House said Feb. 2 that the remarks, in an excerpt obtained by The Associated Press from a transcript of the hourlong phone call, were “part of a discussion about how the United States and Mexico could work collaboratively to combat drug cartels and other criminal elements, and make the border more secure.”

The official, who spoke on condition of anonymity because he was not authorized to discuss the details publicly, described the conversation as “pleasant and constructive.”

“You have a bunch of bad hombres down there,” Trump told Mexican President Enrique Pena Nieto, according to the excerpt given to the AP. “You aren’t doing enough to stop them. I think your military is scared. Our military isn’t, so I just might send them down to take care of it.”

The comments came last Friday in a phone call between Trump and Pena Nieto.

The excerpt from the transcript did not detail exactly whom Trump considers “bad hombres,” nor did it make clear the tone and context of the remark.

The Mexican government said “the negative statements” reported in the AP story “did not occur during” the call.

The remark offers a rare and striking look at how the new president is conducting diplomacy behind closed doors. Trump’s remarks suggest he is using the same bravado with world leaders that he used to rally crowds on the campaign trail.

Related: Mexico starts to unite against aggressive U.S. trade, immigration stanceThe phone call between the leaders was intended to patch things up between the new president and his ally. The two have had a series of public spats over Trump’s determination to have Mexico pay for the planned border wall, something Mexico steadfastly refuses to agree to.

A person with access to the official transcript of the phone call provided only that portion of the conversation to the AP. The person was not authorized to provide the excerpt publicly and gave it on condition of anonymity.

The Mexican website Aristegui Noticias on Tuesday published a similar account of the phone call, based on the reporting of journalist Dolia Estevez. The report described Trump as humiliating Pena Nieto in a confrontational conversation.

Mexico’s foreign relations department said the report was “based on absolute falsehoods.”

Americans may recognize Trump’s signature bombast in the comments, but the remarks may carry more weight in Mexico.

The latest remarks could undercut that, if Pena Nieto is viewed as “weak,” he said.

Trump’s comment was in line with the new administration’s bullish stance on foreign policy matters in general, and the president’s willingness to break long-standing norms around the globe.

A discussion with Taiwan’s president and the recent immigration order are two prominent examples, but nothing has created the level of bickering as the border wall, a centerpiece of his campaign. Mexico has consistently said it would not pay for the wall and opposes it. Before the phone call, Pena Nieto cancelled a planned visit to the United States.

The fresh fight with Mexico last week arose over trade as the White House talked of a 20 per cent tax on imports from the key U.S. ally to finance the wall after Pena Nieto abruptly scrapped his Jan. 31 trip to Washington.

The U.S. and Mexico conduct some $1.6 billion a day in cross-border trade, and co-operate on everything from migration to anti-drug enforcement to major environmental issues.

As the call’s transcript emerged late Wednesday, the Republican-controlled Senate confirmed Rex Tillerson to be secretary of state, a crucial member of President Trump’s team.

Tillerson was quickly sworn in during a ceremony in the Oval Office, where Trump showered him with praise.

“You understand that the job of our diplomats and the mission of the State Department is to serve the interests of the United States of America to make our nation safer, our country more prosperous and our country much more secure,” the president told him. “I do believe we can achieve peace and stability in these very, very troubled times.”

Senators voted 56-43 to approve the former Exxon Mobil CEO after Democrats mounted a vocal yet unsuccessful campaign to derail the bid. They said they feared his four-decade career at the energy giant meant he’d view the world only through the lens of a corporate executive and questioned whether he would confront Trump when he believes the president is wrong.

But Republicans rejected the complaints and declared Tillerson highly qualified for the job. He’ll have his hands full as soon as he’s sworn in, grappling with many of the same geopolitical dilemmas his predecessors did. As senators cast their ballots, the Trump White House put Tehran “on notice” after the Iranian military tested a ballistic missile and allied rebels in Yemen attacked a Saudi naval vessel in the Red Sea.

Tillerson also will have to deal with any fallout stemming from Trump’s executive order on immigration and travel that halts entry for 90 days to citizens from seven majority-Muslim nations.

“I am confident Rex Tillerson has the ability to be the effective leader the State Department needs,” said Sen. Bob Corker, R-Tenn., chairman of the Foreign Relations Committee.

Corker cast Tillerson’s experience at Exxon Mobil as a plus, saying he led a global enterprise with 75,000 employees and forged “deep relationships” with world leaders.

One of those, with Russian President Vladimir Putin, alarmed his opponents on Capitol Hill who believed he was too cozy with the Russian leader and wouldn’t push back aggressively enough when Moscow acted against U.S. interests. Tillerson received an honorific—the Order of Friendship—from Putin’s government in 2013.