One expert estimates that US$75 billion in U.S. products will be subject to new foreign tariffs by the end of the first week of July 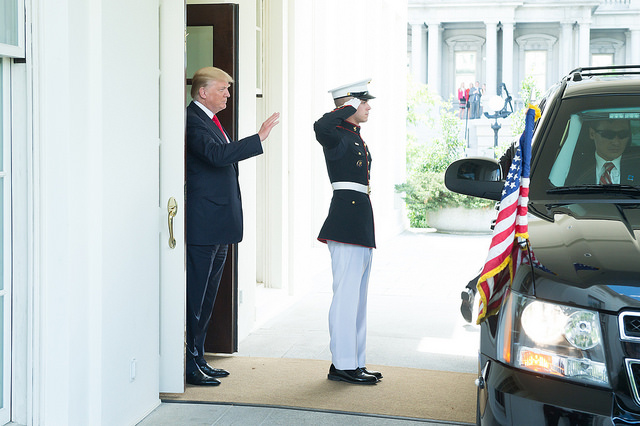 WASHINGTON—The United States attacked first, imposing tariffs on steel and aluminum from around the globe and threatening to hit tens of billions of dollars in Chinese products.

Now, the world is punching back.

The European Union is set Friday to slap tariffs on US$3.4 billion in American products, from whiskey and motorcycles to peanuts and cranberries. India and Turkey have already targeted U.S. products, ranging from rice to autos to sunscreen.

And the highest-stakes fight still looms: In two weeks, the United States is to start taxing $34 billion in Chinese goods. Beijing has vowed to immediately retaliate with its own tariffs on U.S. soybeans and other farm products in a direct shot at President Donald Trump’s supporters in America’s heartland.

The tit-for-tat conflict between the United States and China—the world’s two largest economies—is poised to escalate from there. The rhetoric is already intensifying.

“We oppose the act of extreme pressure and blackmail by swinging the big stick of trade protectionism,” a spokesman for China’s Commerce Ministry said Thursday. “The U.S. is abusing the tariff methods and starting trade wars all around the world.”

Cecilia Malmstrom, the EU’s trade commissioner, acknowledged that the EU had targeted some iconic American imports for tariffs, like Harley-Davidson motorcycles and bourbon, to “make noise” and put pressure on U.S. leaders.

John Murphy, a senior vice-president at the U.S. Chamber of Commerce, estimates that $75 billion in U.S. products will be subject to new foreign tariffs by the end of the first week of July.

“We’ve never seen anything like this,” said Mary Lovely, a Syracuse University economist who studies international trade—at least not since countries tried to wall themselves off from foreign competition during the Great Depression.

Those personally in the line of fire are among the most concerned.

“It will be a disaster,” said Nagesh Balusu, manager of the Salt Whisky Bar and Dining Room in London and expects the European Union’s tariffs to add more than $7 to the price of a bottle of Jack Daniels, which is imported from Tennessee. “It’s going to hit customers, that’s for sure. How they’ll take it, we’ll have to wait and see.”

As painful as the brewing trade war could prove, many have seen it coming.

Trump ran for the presidency on a vow to topple seven decades of American policy that had favoured ever-freer trade among nations. He charged that a succession of poorly negotiated accords—including the North American Free Trade Agreement and the pact that admitted China into the World Trade Organization—put American manufacturers at an unfair disadvantage and destroyed millions of U.S. factory jobs.

He pledged to impose tariffs on imports from countries that Trump said had exploited the United States. Late last month, Trump proceeded to infuriate U.S. allies—from the EU to Canada and Mexico by imposing tariffs of 25 per cent on imported steel and 10 per cent on aluminum. The president justified the move by saying imported metals threatened America’s national security—a dubious justification that countries have used rarely because it can be so easily abused.

And he is threatening to impose another national security-based tariff on imports of cars, trucks and auto parts.

Trump has also started a trade fight with China over Beijing’s sharp-elbowed efforts to overtake U.S. technological dominance. China’s tactics range from forcing American companies to hand over technology in exchange for access to the Chinese market to outright cyber-theft.

The White House last week announced plans to slap 25 per cent tariffs on 1,100 Chinese goods, worth $50 billion in imports. Trump would start July 6 by taxing $34 billion worth of products and later add tariffs on an additional $16 billion in goods.

The Chinese have said they will respond in kind. Trump said he would then retaliate against any counterpunch from Beijing by targeting an additional $200 billion in Chinese products, and then yet another $200 billion if China refused to back down. All told, the $450 billion in potential tariffs would cover nearly 90 per cent of goods China sends to the United States.

The tariffs and threats have begun to take a toll. Steel and aluminum prices, for example, have shot up and supplies have become scarce.

“Steel pricing is usually relatively stable,” said Al Rheinnecker, CEO of American Piping Products in Chesterfield, Missouri, which distributes steel pipe to numerous industries. But “since April, you can quote something on Monday, and if the customer doesn’t buy it right away, you may have to raise the price on Thursday.”

So far, Rheinnecker has managed to pass along the higher costs to his customers. He’s not sure how long that will last.

The Commerce Department is allowing companies to request exemptions from the steel and aluminum tariffs—if they can show that the metals they need aren’t available from American producers. The department expected 4,500 requests. But it’s been overwhelmed by more than 20,000. This week, it said it has processed just 98 requests so far, approving 42 and denying 56.

The rising tensions and the chaos surrounding the steel and aluminum tariffs are starting to generate pushback on Capitol Hill. Senators this week grilled Commerce Secretary Wilbur Ross.

“As you consider these tariffs, know that you are taxing American families, you are putting American jobs at risk, and you are destroying markets—both foreign and domestic—for American businesses of all types, sorts and sizes,” said Senate Finance Chairman Orrin Hatch, R-Utah.

Economists and trade analysts worry that there may be no way out of an all-out trade war between the United States and its most vital trading partners.

“The president has been so belligerent that it becomes almost impossible for democratically elected leaders—or even a non-democratic leader like (Chinese president) Xi Jinping—to appear to kowtow and give in,” said Philip Levy, senior fellow at the Chicago Council on Global Affairs and a former White House trade adviser. “The president has made it very hard for other countries to give him what he wants.”

**This story has been corrected to show that Nagesh Balusu is the manager of the Salt Whisky Bar and Dining Room in London. An earlier version misspelled his surname as Balesu and incorrectly said he was the restaurant’s owner.**

—AP Writer Robert Stevens in London contributed to this report.


Related Stories
China appeals to Trump to avoid disrupting trade
World holds its breath as Trump prepares to punish China on trade
U.S. vs. China: a ‘slap fight,’ not a trade war
WTO chief: If not for body, there would already be trade war