by Kieth Leslie and Ian Bickis, The Canadian Press  June 7, 2016

Ontario's climate action plan is set to be released Wednesday; Proponents vow natural gas can reduce emissions now, while critics say it's not the government's job to pick the fuel of the future 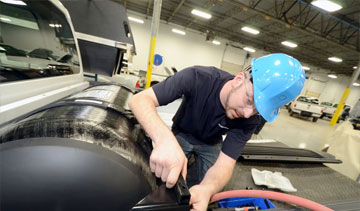 TORONTO—Ontario will spend up to $100 million to help natural gas suppliers create more fuelling stations to encourage more trucks to use the fuel instead of diesel or gasoline.

The Canadian Press has learned the move to expand the use of natural gas as a fuel for trucks will be part of the Liberal government’s action plan on climate change, which will be released Wednesday.

Sources say there is some interest in the trucking industry for a switch to natural gas, but truckers want to see a province-wide network of fuelling stations.

The sources also say the action plan will not call for a ban or phasing-out of natural gas or any other fossil fuels for home heating as reported earlier.

Natural gas is used to heat more than three-quarters of the homes in Ontario, and critics had warned that phasing it out would drive up energy costs for everyone.

Provincial experts believe a steady rise in the price of natural gas as governments put a price on carbon will eventually prompt homeowners and builders to look for cheaper, cleaner alternatives, so they see no need to ban fossil fuels for home heating.

The sources say the province will offer incentives when homeowners are ready to install alternatives such as geo-thermal or heat pump systems, and point out no one is talking about a return to old-fashioned electric baseboard heaters.

They say the idea is to give consumers a choice, not to force them into making changes, and the Liberals will be ready with financial support when homeowners decide on their own to switch to cleaner alternatives.

The plan will also include $900 million to retrofit social housing and apartment buildings with such things as energy-efficient windows and thermal insulation on pipes.

Ontario will implement a cap-and-trade system for greenhouse gas emissions as the other part of its plan to address climate change, and expects that will add about $5 a month to home heating bills and about 4.3 cents a litre to the price of gasoline.

The Liberal government hopes to raise $1.9 billion a year from joining a cap-and-trade plan with California and Quebec, which will allow industrial polluters to buy extra emission credits if necessary or sell emission credits that they don’t use.

The government has promised all of that money will be spent on initiatives that help individuals, companies and municipalities adapt to new cleaner technologies that will reduce their carbon footprint.

Fueling trucks with natural gas
Proponents of natural gas-fuelled vehicles say they can help reduce carbon emissions now but government support is needed to get businesses on board.

The alternative fuel has been around for decades but new technology developments and greater awareness of the need to bring down emissions has led to heightened interest, said Bruce Winchester, executive director of the Canadian Natural Gas Vehicle Alliance.

“We see some opportunities and some real potential, particularly as governments start to look at transportation as a source of greenhouse gas emissions,” he said.

Like most alternative fuels, natural gas still only makes up a small fraction of the fuel powering the total number of vehicles on the road. But Winchester said he sees potential for growth in medium- and heavy-duty fleet vehicles, where energy demands are higher.

Natural gas has about 15 per cent less greenhouse gas emissions than diesel. That can translate into a far bigger impact if trucking fleets are converted to use natural gas.

“You’re going to get bigger emissions savings when you look at an application that requires a lot of kilometres and therefore a lot of fuel burned,” he said.

He pointed to C.A.T. Transportation in Quebec that as of February had switched 20 trucks to compressed natural gas for long-haul transportation down to Texas. The company said that as a result, in the first six weeks of the year it saved 18 tonnes of carbon dioxide.

But Winchester said carbon prices are too low or non-existent to make it enough of a financial incentive to switch, especially with diesel prices at their lowest in years, which is why the industry is hoping for government help.

“That’s going to be some welcome investment,” said Murray. “These are businesses and they’re looking at the bottom line. And if there’s not an incentive to fuel switch, they’re going to think twice about it.”

British Columbia and Quebec already have some forms of natural gas vehicle incentives. A spokesman for Alberta’s environment minister said the government could consider alternative fuelling options through the energy efficiency program once it’s established.

The federal government also promised $62.5 million for alternative fuels in its latest budget, but almost all of that is going towards electric vehicle infrastructure.

Murray, who manages the largest commercial natural gas vehicle fleet in Canada at Enbridge, says that for heavier-duty vehicles there aren’t really electric options, but natural gas is ready to go.

“It’s readily deployable, commercialized technology that has an immediate impact on GHGs and we can get it out right now in the heavy duty space, where there aren’t any electric options,” said Murray.

But with so many competing vehicle fuel alternatives, automotive analyst Dennis DesRosiers says governments should stay out of picking winners and losers.

“It’s not the government’s job to decide whether it’s going to be natural gas or diesel in the future,” he said. “Just set a standard and let industry figure it out.”