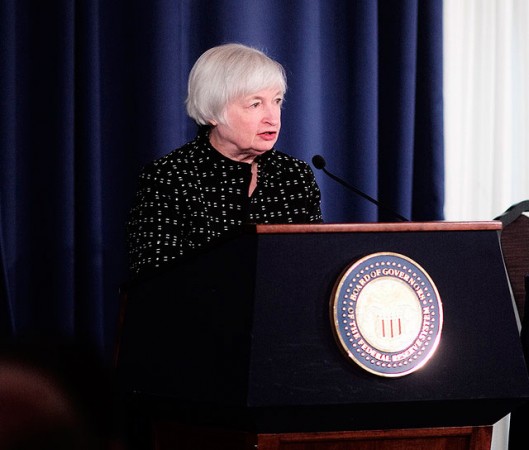 WASHINGTON—Federal Reserve Chair Janet Yellen went out of her way June 6 to stress that the U.S. economy appears fundamentally solid.

Yet the Fed chair also sent a contrasting message in a speech in Philadelphia: So many uncertainties surround the economy that it’s impossible to sketch any timetable for when the Fed might raise interest rates again.

Thirteen times Yellen mentioned some variation of the word “uncertainty” starting with a question raised by a dismal jobs report the government issued Friday:

“Is the markedly reduced pace of hiring in April and May,” Yellen asked, “a harbinger of a persistent slowdown in the broader economy?”

She didn’t claim to know the answer. The Fed, she said, “will be wrestling” with that question in the months ahead—just as it will be studying other uncertainties she pointed to. In contrast to what she signalled late last month, when Yellen said a rate hike would likely be appropriate in “coming months,” she offered no timetable for the Fed to resume raising rates.

That “suggests to us that she is in no hurry,” said Chris Rupkey, chief financial economist at MUFG Union Bank in New York. “We are telling clients to take the summer off. See all of you Fed watchers in September.”

Among the uncertainties she noted in her speech:

The Job Market
Yellen called Friday’s jobs report for May “concerning.” Employers added just 38,000 jobs in May, the weakest monthly gain in more than five years. Job gains have now averaged just 116,000 in the past three months, down sharply from an average of 230,000 in the 12 months ending in April.

But Yellen noted that other gauges of the job market, such as fewer applications for unemployment benefits, have been more positive. She said the Fed would be studying whether Friday’s jobs report marked a temporary slump or signalled more lasting troubles.

Domestic Demand
While the U.S. economy has been outperforming the rest of the world, its growth has depended on domestic demand, especially its main fuel _ consumer spending. Yellen said a key question is whether U.S. demand can remain strong “amid fairly considerable global bumpiness.” She said a particular concern is weakness in investment spending by U.S. companies, a slowdown that she said she thinks will prove temporary.

Global Pressures
Many of the financial stresses from abroad that erupted early this year have eased. But Yellen cautioned that there is still cause for concern, particularly from China. China is straining to rebalance its economy, the world’s second-largest, away from export-led growth to more domestic demand. At a time of sluggish global growth, low inflation and ultra-low interest rates, investor sentiment could shift very quickly. Yellen said a particular worry is a negative reaction if British voters decide to leave the European Union in a June 23 vote.

Weak Productivity
Even as the job market has strengthened, overall economic growth, as measured by the gross domestic product, has been tepid. In part, Yellen said, that’s because productivity has been so weak. Productivity _ the amount of output per hour of work _ is a vital factor supporting rising living standards. Yellen noted that economists are divided over whether the productivity slowdown will soon end. The Great Recession, the Fed chair said, depressed spending on the research and development needed for future productivity growth. Once this spending rebounds, she said, productivity gains could accelerate.

Low Inflation
Oil prices have stopped falling, and the dollar has stopped rising _ good signs for higher inflation. A price gauge favoured by the Fed has shown inflation running below its 2 per cent target for four years. Yellen said one reason for concern is that some surveys of long-term inflation expectations by consumers and businesses have declined. If that trend deepens, she said, it could make it harder for inflation to reach the Fed’s target.

When inflation remains too low, it can depress spending, hold back growth and make the cost of loans more burdensome.

For all the uncertainties she cited Monday, Yellen said she still expects the job market to keep improving, wages to accelerate and inflation to rise toward the Fed’s target.

“I continue to believe that it will be appropriate to gradually reduce the degree of monetary policy accommodation, provided that labour market conditions strengthen further and inflation continues to make progress toward our 2 per cent objective,” Yellen told an audience at the World Affairs Council in Philadelphia.