November 14, 2017  by David Eggert And John Flesher, The Associated Press 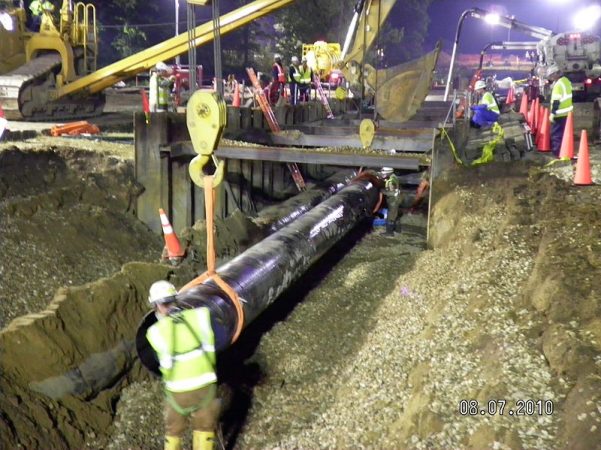 Technicians begin removal of a section of pipe from an Enbridge pipeline oil spill site near Marshall, Mich. in July 2010. PHOTO: EPA

The Republican governor criticized Enbridge Inc. after the Canadian company issued an update on inspections and repairs of Line 5, which carries about 23 million gallons (87 million litres) of oil and natural gas across northern Wisconsin and Michigan to refineries in Ontario each day.

“I am no longer satisfied with the operational activities and public information tactics that have become status quo for Enbridge,” Snyder said in a statement. “It is vitally important that Enbridge immediately become much more transparent about the condition of Line 5 and their activities to ensure protection of the Great Lakes.”

A nearly 5-mile-long segment of the line runs along the bottom of the Straits of Mackinac, which connects Lakes Huron and Michigan. That section is divided into two pipes that have been in place since 1953. Enbridge says they are in good condition and monitored closely, but environmentalists contend they are at risk of leaking and want them decommissioned.

The company, based in Calgary, has disclosed in recent months that gaps have formed in protective enamel coating on the outside of the pipes. Enbridge acknowledged in October some of its personnel knew about the problem for years but only recently informed the state.

Enbridge said then that eight areas had been found to have coating gaps or calcium carbonate deposits, which indicate places where coating could be thin or missing.

Six have been repaired, according to Guy Jarvis, executive vice-president of liquid pipelines and major projects.

But he said additional gaps and calcareous deposits had turned up during inspections of 128 places where anchors have been installed to support the pipelines. All have been examined with a remote underwater vehicle, and divers have looked at 48 of them.

They found three spots of bare steel, plus calcareous deposits at “many of the locations,” Jarvis said Monday in a phone conference with reporters. He did not say how many, but state officials briefed separately by the company said a majority of the 48 diver-inspected locations had gaps.

“A year ago, Enbridge said there were no coating gaps in the Straits pipeline,” said Valerie Brader, executive director of the Michigan Agency for Energy. “When will we know the full accounting of what Enbridge knows about Line 5?”

“The exact cause of these deposits at these locations will be further assessed in conjunction with the state in the coming weeks,” Jarvis said. “We remain confident in the continued safe operation of Line 5 and highlight that no evidence of corrosion on the line was found in any of this work.”

Enbridge is scheduled to outline its findings about the pipelines’ status, including the condition of protective coating and anchors, during a Dec. 11 appearance before the Michigan Pipeline Safety Advisory Board. State officials said they would bring on “additional technical expertise” to evaluate the company’s presentation.

The state plans to release a final report Nov. 20 on options for transporting the oil and natural gas carried by Line 5. A preliminary version listed a number of alternatives, including shutting down the line, keeping it going or replacing it.