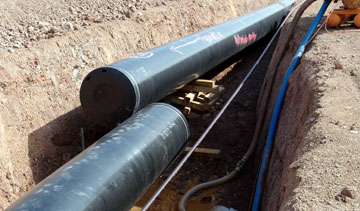 TRAVERSE CITY, Mich.—Michigan officials said that Enbridge Energy Partners had violated a legal requirement by having too few support anchors for twin oil pipelines running beneath the environmentally sensitive waterway that links Lakes Michigan and Huron.

Enbridge found similar problems two years ago with the pipelines in the Straits of Mackinac and said it had taken steps to ensure they would not happen again, but recent findings “have refuted that prediction,” state Attorney General Bill Schuette and other officials said in a letter to the Canadian company.

The pipes are a small section of Enbridge’s 645-mile-long Line 5, through which 23 million gallons of crude oil and liquid natural gas move daily between Superior, Wisconsin, and Sarnia, Ontario. Environmental groups have pushed to shut down the underwater pipes, saying a rupture could do catastrophic damage to the Great Lakes. The company insists the pipes have never leaked and are closely monitored.

“The violation notice issued today by state leaders should serve as a wake-up call,” said Lisa Wozniak, executive director of the Michigan League of Conservation Voters. “Due to the risk the Line 5 pipeline poses to our Great Lakes, we must stop oil from flowing along the bottom of the Straits of Mackinac as quickly as is feasible.”

Enbridge spokesman Ryan Duffy said the pipes were stable and the need for more supports did not signal a safety threat.

“Our inspection process did what it’s designed to do,” he said.

Some sections of the underwater pipes rest directly on the lake bottom, while others are supported by steel anchors held in place by screws drilled into the lakebed. An easement granted by the state when the lines were laid in 1953 requires that no section of the pipelines longer than 75 feet be without support from either the ground or an anchor.

But during a June inspection with a remote underwater vehicle, Enbridge discovered four locations where unsupported sections exceeded the limit by a foot or two, Duffy said.

“Enbridge is legally responsible not only for promptly correcting this violation of the easement, but taking effective measures for preventing any more recurrences of this problem,” said the letter signed by Schuette; Department of Environmental Quality Director C. Heidi Grether; and Keith Creagh, director of the Department of Natural Resources.

The spacing problems were caused by sediment erosion that created open areas beneath the pipes, Duffy said. Enbridge has applied for a DEQ permit to install anchors in the four spots that were detected and 15 others that could exceed the 75-foot limit as future erosion occurs, he said.

“The Great Lakes is a dynamic environment and we anticipated that at times there can be changes to the lake bottom,” Duffy said.

But the state officials said the company had found other spacing issues during its last underwater inspection in 2014. At that time, Enbridge installed 40 more anchors and said it had developed a “predictive maintenance model” that would ensure the 75-foot limit would not be exceeded again.

The officials instructed Enbridge to explain why its model had failed and come up with a better plan within two weeks. One possible improvement would be more frequent inspections and support installations, they said.

Enbridge agreed to stepped-up inspections of the Straits of Mackinac pipelines last month under a $176 million settlement with the federal government from a 2010 rupture of another pipeline that polluted the Kalamazoo River in southwestern Michigan, the costliest inland oil spill in U.S. history.