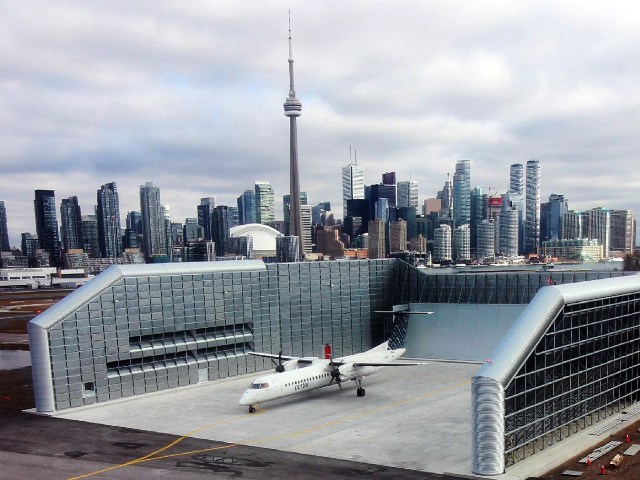 TORONTO—PortsToronto has completed work on a three-sided run-up enclosure on the southwest side of Billy Bishop Toronto City Airport, a stone’s throw from the city’s downtown.

The $9 million project is designed to absorb and dampen noise from aircraft engines as they prepare for takeoff, addressing one of local residents’ major concerns with the island airport.

The open-top enclosure stands 14-metres high and about 65-metres across on three sides—easily large enough to accommodate the Bombardier Q400 turboprops that frequent the airfield.

“Operating an airport that is part of a thriving, mixed-use urban waterfront requires the right balance to ensure that operations keep pace with the surrounding community and that measures are in place to mitigate the impacts associated with running a successful airport,” Geoffrey Wilson, CEO of PortsToronto, which owns and operates the airport.

Run-ups part of the take-off procedure mandated by Transport Canada and involve checking the plane’s propellers, which can create a significant amount of noise. The enclosure was designed by U.S.-based Blast Deflectors Inc. and is equipped with specialized acoustic panels to absorb sound, as well as vents to optimize aerodynamic performance.

PortsToronto started work on the enclosure last fall as part of a three-year project to rehabilitate and modernize the airfield.