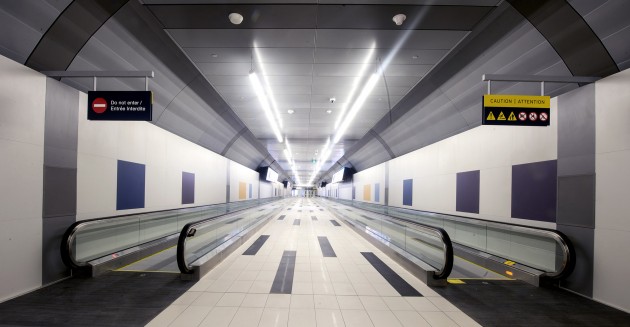 Travellers undertaking the 240-metre jaunt under Lake Ontario have not only a $82.5 million investment to thank for avoiding the murky swell of the lake water, however, but a cleantech contribution. The pedestrian will be powered with 100 per cent renewable Bullfrog Power electricity.

The green energy company and PortsToronto have announced Bullfrog Power generators will contribute the amount of renewable energy to the grid to match the amount of power the pedestrian tunnel uses. In addition, “bullfrogpowering” the pedestrian tunnel includes 42 state-of-the-art LED and LCD features along the tunnel walls that make the six-minute journey seem somewhat less subterranean, and significantly less perilous.

“By choosing Bullfrog Power’s green electricity for the pedestrian tunnel, PortsToronto is reducing its environmental impact while supporting the development of new green energy projects in communities across Canada,” Ron Seftel, CEO of Bullfrog Power, said.

Across Canada, Bullfrog Power’s green electricity comes from a blend of wind and low-impact hydro power sourced from new Canadian renewable energy facilities. The company cites PortsToronto as one of the ten largest purchasers of green energy in Canada.