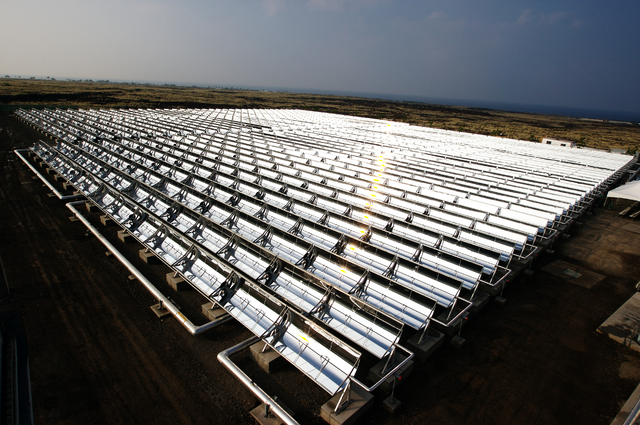 A thermal solar installation on the nearby big island of Hawaii. SolarCity’s project on Kauai will instead use photovoltaic solar coupled with Tesla Energy’s Powerpack. PHOTO: Xklaim, via Wikimedia Commons

Last fall, the Kaua’i Island Utility Cooperative contracted SolarCity to build a “first-of-its-kind” solar array and energy storage system to help trim the amount of fossil fuel-produced energy required at peak times between 5 p.m. and 10 p.m. Now, the utility has announced Tesla is on board for the project as well.

The KIUC, which serves approximately 33,000 people on Kauai, or about half its inhabitants, has been paring down on its use of fossil fuels since 2009, and its latest investment will cut into its emissions further by using a solar array coupled with Tesla’s lithium-ion battery storage system to provide the island’s resident’s with clean electricity after the sun goes down.

As the contractor for the project, SolarCity chose to use Tesla’s 52 MWh Powerpack after soliciting bids from a range of battery makers. The Energy division of the Elon Musk-headed automaker launched itself into the energy storage space last year, announcing consumer and utility-scale products. Not one to sit on his hands, Musk is also the chair of SolarCity. Under the project agreement, KIUC will pay SolarCity 14.5 cents per kilowatt hour for the project—slightly more than it pays for its daytime solar energy, but less than it pays for diesel.

Cutting back on greenhouse gas emissions is no small task for island communities around the world, which rely heavily on burning diesel, coal or natural gas for their energy.

By the end of the year, the KIUC will have achieved a 38 per cent clean energy mix, up from only five per cent in 2009. The company hopes to generate half its energy from clean sources by 2023.

The solar storage project, which can feed up to 13 megawatts of electricity into Kauai’s grid, has received most of the necessary approvals to move forward with construction, but still must clear the Hawai’i Public Utilities Commission. Assuming it steps over that hurdle quickly, construction will begin on the system in April and commissioning will take place by the end of the year.