DETROIT—When you’re sitting on a gold mine, it’s best to grab your gear and get to it.

It’s where you’ll also find the all-new Lexus RC F, a 450-horsepower performance coupe built on the same Toyota 86 underpinnings as the Subaru BRZ and Toyota-owned Scion FR-S that is set to do battle with German automaker BMW’s M4 (formerly M3) sports car.

Touted as the most powerful V8-sporting Lexus yet, the RC F makes use of a 5.0-litre eight-cylinder engine that puts out “well above” 450-horsepower and 380 ft.-lbs. of torque.

To get that power to the ground, the engineers at Lexus opted for a Torque Vectoring Differential (TVD)—the first ever application in a front-engine, rear-drive car.

That’s hooked up to an eight-speed Sports Direct Shift (SPDS) transmission that Lexus said has been tuned to improve “linear response to accelerator-pedal operation, which lets the driver better feel the torque and power as it is applied.”

The TVD has three operating modes that range from standard for everyday driving to a track setting for the weekend racer.

Borrowing from the Lexus LFA supercar, an active rear wing is incorporated into the trunk lid to provide down force at speeds of more than 80 km/h. 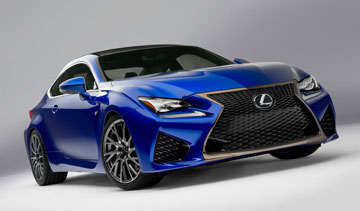 The spoiler is part of an aerodynamic package that includes a flat underbody, aero stabilizing fins and air ducts at the rear of the front bumper and front fenders.

More LFA inspiration comes from ir outlets in the hood.

Lexus said the goal is to have the RC F tip the scales at below about 4,000 lbs. when it is available to the public.

No release date or pricing has been made available.