DETROIT—Korean automaker Kia Motors is looking to tap into the increasingly popular sports coupe market, unveiling a new concept that could act as a springboard for a production entry in the near future.

Making its debut at the North American International Auto Show (NAIAS) in Detroit, the GT4 Stinger concept fills a major gap in Kia’s lineup and could launch the automaker into competition with the likes of parent company Hyundai Motor Co., as well as Toyota Motor Corp. and Subaru, as companies clamour for a piece of the budget-friendly performance coupe market.

Initially teased by Kia in the weeks leading up to the Detroit show, the Stinger created plenty of buzz in the industry as many expected the concept to signal a coming of age for the automaker as it finally beings to shed its commuter car reputation in favour of a more affordable-yet-fun mantra.

The Stinger lives up the the hype.

While it possesses the design cues synonymous with concept cars, Kia brought to the table a certain sense of tangible realism to the table in Detroit.

Underneath the extravagantly overdone body lines and over-the-top panit job lies the bones of a real car.

But they are even more than that; they are the bones of a proven one.

Borrowing from parent company Hyundai’s Genesis Coupe model as well as its own performance-meets-luxury Optima sedan, Kia opted for the reliable 2.0-litre turbocharged four-cylinder engine under the hood of the Stinger—but with a twist.

Compared to the estimated 274-horsepower the gasoline direct injection (GDI) powerplant in the Genesis and Optima produces, that same engine under the hood of the Stinger concept has been tuned to produce an impressive 315-horsepower.

The 2.0-litre engine puts power to the rear wheels through a six-speed manual transmission.

“Our Optima race cars use the same engine and can produce more than 400-horsepower,” Tom Kearns, chief designer at Kia Design Center America (KDCA) in Irvine, Calif., said in a release about the car.

“So why not infuse our concept with the kind of power that will make people take notice?”

And notice they will.

Kia continued to borrow from its race team beyond the engine bay, choosing a traditional wide-and-low approach in the design and engineering.

A custom chassis with independent double wishbone suspension, the wheelbase and overall length of the Stinger—103.1 inches and 169.7 inches, respectively—are both shorter than Kia’s Forte sedan, but its track is wider than the automaker’s largest sedan, the Cadenza.

The roof line is almost nine inches lower than its smallest car, the Rio sub-compact, coming in at 49.2 inches.

According to the Kia, the Stinger also weighs in at only 2,874 lbs., with a weight distribution of 52-48 front and back.

Bringing that mini-yet-mighty package to a stop is a set of giant Brembo two-piece 15-inch cross-drilled rotors and four-piston calipers tucked under 20-inch wheels.

Kia made sure to include the obligatory disclaimers that comes with a concept car unveil—”currently no plans to bring the concept to production”—but the automaker made sure to note that it “has a history of delivering production vehicles that bear a strong resemblance” to its concept cars. 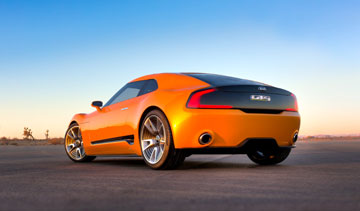 There's a good chance a toned down version of Kia's GT4 Stinger concept makes it to production down the road. PHOTO Kia

The automaker said the Stinger project was launches with a goal of paying homage “to the glory days of purebred, affordable sports cars.”

The truth is probably closer to playing a game of catch-up, with Hyundai’s Genesis and the jointly developed Subaru BRZ/Scion FR-S already on the market.

Regardless of the motivation, you can count on seeing a Stinger-inspired production car at the local Kia dealership sooner rather than later.