After patrolling Japanese fields for 25 years, flyers set to take on U.S. crops 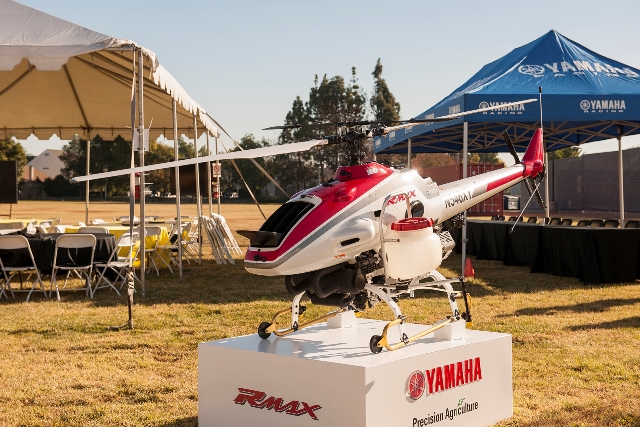 The Yamaha RMAX. Introduced in 1997, the remotely-piloted helicopter treats 2.4 million acres of farmland in Japan each year. PHOTO: Yamaha

CYPRESS, Calif.—Agriculture drones have finally made their way across the Pacific.

Yamaha Motor Corp. has been making commercial unmanned aerial vehicles since long before drones went mainstream; the company’s remotely-piloted helicopters have been a common site in Japanese fields since 1991, logging more than two million operating hours across the island nation, yet American regulators have persistently resisted the technology.

“With the certification achieved, Yamaha can move forward with plans to provide agricultural spray service operations in the U.S. using its RMAX remotely piloted helicopters,” the company said.

While the Part-137 certification gives Yamaha the federal nod to begin spraying in the U.S., the company must also secure approvals from the states and local authorities where its RMAX will be used. The UAV, which premiered in Japan in 1997, has since logged more than two million flight hours. 2,600 of the helicopters are currently in use worldwide, spraying 2.4 million acres of land each year. Pending state approvals and the adoption of the technology, Yamaha could expand this market significantly.

“We appreciate the FAA’s Part 137 Certification and we’re very excited to bring all the proven benefits and advantages of the RMAX to agricultural customers here in the U.S.,” Rob Trester, head of Corporate Planning at Yamaha, said.

Yamaha expects to begin spraying at the beginning of the 2016 growing season, meaning next year could be a sea change for U.S. farmers.