The new 31-storey office tower, dubbed The Exchange, will be located in Vancouver’s financial district. 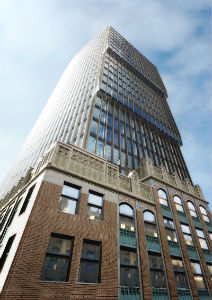 Platinum is the highest status a Leadership in Energy and Environmental Design(LEED) build can be awarded under the system—the lowest is Certified, followed by Silver and Gold—and the status awarded depends on factors like materials used in construction and water efficiency, location and land.

The Exchange will use 35 per cent less energy than conventional office buildings and will produce 85 per cent fewer greenhouse gas emissions, according to Credit Suisse.

It will also be Canada’s second tallest office building to be awarded LEED Platinum certification.

“Not only will The Exchange add critical new office space and job space but it will hit the highest green standards and deliver a major economic benefit to our city,” said Gregor Robertson, Vancouver’s mayor. “The Exchange supports a number of new economic and greenest city policies and initiatives, and it is great to have Credit Suisse put down roots in Vancouver.”

It’s the first building in North America Credit Suisse has constructed from scratch.

“Normally, we would invest in a fully-developed leased property,” says Rainer Scherway, director at Credit Suisse Real Estate Asset Management. “This office tower represents the first time in North America that we are confident enough to build a major project from the ground up.”

However, part of the project will involve renovating the neighbouring Old Stock Exchange Building, which was built in 1929, to become LEED Platinum-compliant.