Aerodynamic improvements make the Z/28 a beast on the track, and a sure bet on your wishlist

Last month we showed you just how impressive the new Z/28 is, posting a video of its lap time around Germany’s famed Nürburgring Nordschleife, considered the industry benchmark for speed machines.

The Oshawa, Ont.-built Z/28’s lap time around the 20.8-kilometre road course was an astonishing 7:37.40—four seconds faster than the supercharged Camaro ZL1.

That’s also faster than the published times for the Porsche 911 Carrera S and Lamborghini Murcielago LP640.

Oh, and did we mention part of that Lamborghini-beating lap was completed in the rain?

A pretty solid showing for the all-new Z/28.

While it’s one thing to examine the numbers and specs that pushed the car around the ‘Ring so quickly—the 505-horsepower and 481 lb.-ft. of torque produced by its naturally-aspirated 7.0-litre Corvette-sourced LS7 engine, for example, helps—they don’t really paint the complete picture. 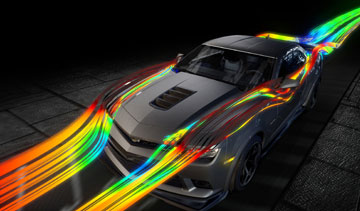 A host of modifications, including a new front splitter, wheel house extensions and deflectors at the bottom-front corners of the front wheel flares also contribute to the car’s downforce-producing aerodynamics, taking the place of a conventional air dam. PHOTO General Motors

Thankfully, the folks over at General Motors decided to break it down.

For starters, GM engineers in Oshawa and Detroit were tasked with taking a street car and modifying it for track-specific driving.

That means any concessions made in order to squeeze every last drop out fuel economy out of the modern day muscle car were thrown out the window.

“Most production cars are designed with some lift at speed in order to slip through the air for greater fuel economy, but the … Z/28’s track-oriented purpose dictated an entirely different take on airflow management,” lead development engineer of aerodynamics Tom Froling said in a report detailing the car’s engineering prowess.

“Its carefully tailored aerodynamics package generates downforce for greater handling stability at speed, and the grilles are optimized to meet stringent cooling flow and brake-cooling requirements.”

Staring at the front of the Z/28, it’s easy to spot some obvious differences compared to lesser trim levels.

A new front splitter provides downforce at the front of the car, enhancing cornering capability and high-speed stability.

Designed to withstand 250 lbs. of downforce at its tip, the splitter is matched with a closeout panel under the front of the engine compartment that also enhances aerodynamic characteristics.

Continuing underneath the Z/28, the underbelly sports a pan that helps reduce front lift while also keeping the drivetrain cool.

Modified NACA duct profiles were designed to draw air into the underbody tunnel area, where they work with unique wheelhouse liners for optimal airflow.

Wheel house extensions help cover the Z/28’s wide tires to push air past the wheels, while deflectors at the bottom-front corners of the front wheel flares also contribute to the car’s downforce-producing aerodynamics, taking the place of a conventional air dam.

Aside from providing better engine cooling than a fully enclosed hood, the Z/28’s bonnet provides a path for air channeled through the grille to exit out the hood and over the car.

Without the vent, the air would be pushed out the bottom of the engine compartment, which could generate lift. 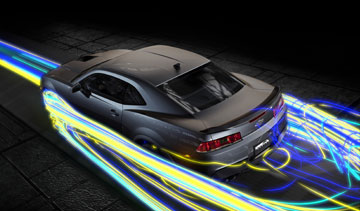 A functional spoiler with a “wickerbill” tab at the edge of the wing adds approximately 28 counts of drag, improving rear lift performance by 70 counts. PHOTO General Motors

And finally, the back of the Z/28 sports a functional spoiler that was modified with a “wickerbill”—a small, vertical tab at the edge of the wing.

While it makes up only a small change in appearance, GM said the wickerbill adds approximately 28 counts of drag, improving rear lift performance by 70 counts.

That allows the Z/28 to handle turns at higher speeds and delivers greater overall high-speed stability.

Combined with lighter components like thinner rear window glass and wheels and chassis modifications, the engineers at GM have turned the Camaro into a menacing track machine.

For your viewing pleasure, we’ve re-posted the video of the Z/28’s fastest Nürburgring lap below.

Warning: put your bib on first to prevent drooling on your keyboard.

You and your IT guy can thank us later.