TORONTO—A Canadian shipping firm is looking to make its national competitors green with envy after taking delivery of the first in a line of groundbreaking, eco-friendly freighters.

Showcased at the Port of Toronto, Algoma Central Corp.’s new M.V. Algoma Equinox dry-bulk carrier promises to be the greenest—and one of the largest—in the country when it takes to the St. Lawrence Seaway to deliver iron ore and grain in Canada and the United States.

Part of a $300-million fleet renewal by St. Catharines, Ont.-based Algoma Central, the Chinese-built Algoma Equinox gearless bulker is the first of eight Equinox Class vessels manufactured by Nantong Mingde Heavy Industry Co., Ltd. to operate in and around the Great Lakes and St. Lawrence River, which help make up the more than 3,700-kilometre St. Lawrence Seaway.

“These state-of-the-art vessels represent the next generation of Great Lakes bulk carriers and are consistent with Algoma (Central’s) commitment to environmental sustainability,” said Greg Wight, president and CEO of Algoma Central.

What makes the vessels so environmentally friendly is their closed-loop exhaust scrubbing system, which eliminates 97 per cent of all sulphur dioxide emissions before they reach the atmosphere.

A true testament to modern engineering, the Algoma Equinox and its sister ships deliver class-leading fuel efficiency and emissions output, putting Algoma Central ahead of the curve as new emissions standards are phased in over the next decade.

The massive ship—the vessel is 740 feet long, or about the height of Toronto’s 56-floor TD Bank Tower—has 14 per cent more cargo capacity in its holds and moves 17 per cent faster than traditional domestic dry-bulk freighters, but burns less fuel and produces less emissions than its predecessors.

According to Algoma Central, the Equinox Class of vessels provide fuel savings in the neighbourhood of 26 per cent compared to traditional carriers on Canada’s waters, or 45 per cent less per tonne kilometre of cargo than Algoma’s current vessel average.

That improved efficiency is thanks to the ship’s five-cylinder engine and exhaust scrubbing system that uses distilled water to isolate and remove harmful sulphur dioxide emissions from the exhaust.

On a tour of the Algoma Equinox, Capt. Jim Pound, vice-president of operations with Algoma Central, spoke enthusiastically about the groundbreaking emissions system and what it means for the company—and environment.

According to Pound, the scrubber works by injecting a spray of distilled water and caustic soda into the exhaust gases, which neutralizes sulphur dioxides.

That water, which contains the sulphur dioxide molecules, is then extracted and brought into a holding tank.

“What we (then) have left going out of the stack is zero emissions when it comes to sulphur dioxide,” Pound said after walking through the ship’s three-deck engine room.

According to Pound, the water used in the exhaust scrubbing spray is distilled on board, and the sulphur dioxide is held in the bowels of the ship before being disposed of.

“We think probably about once or twice a year we’ll bring a contractor on board and we’ll pump it out and have it disposed of in an environmentally safe way,” he said.

The system was developed by Wärtsilä Corp., a power solutions provider which also built the engine that powers the Algoma Equinox.

Part of the motivation behind building the green fleet of carriers, according to Pound, was emissions control area (ECA) regulations being phased in on the Great Lakes and other waterways in Canada that will eliminate the burning of sulphur dioxide in marine operations.

“By 2020, we are not going to be allowed to put sulphur dioxide into the atmosphere. With this we’ll be able to maximize our fleet average and get us to the 2020 standard today,” Pound said.

“We didn’t want to wait—we wanted to be the most environmentally-friendly operation on the Great Lakes.”

Algoma Central management knew it wanted top dry-bulk freight technology back in 2009, when the company assembled an internal design team to outline what was required in a next-generation freighter.

Vessel design firm Delta Marine was consulted on the designs that would eventually become the Equinox Class vessels.

“The mandate to this team was to develop a new (vessel series) which not only would be the most efficient, but also the most environmentally-advanced to operate on the Great Lakes (and) St. Lawrence,” Wight said.

After extensive computer modelling and six physical model tests, the team decided on a vessel design and was ready to begin courting shipyards around the world for quotes.

“Based on the model tests, it was clear that the Equinox Class design team had achieved (its) goal,” Wight said. “This design balanced power and speed with cargo-carrying capability for optimal performance and environmental efficiency.”

In September 2010 Algoma Central signed conditional contracts with Nantong Mingde shipyards for the construction of the vessels.

“The key condition that needed to be resolved before these contracts could become effective was the removal of the 25 per cent import duty that would be applicable on these vessels,” Wight said.

“Fortunately, less than three weeks after the shipbuilding contracts were signed, (federal Finance) Minister (Jim) Flaherty came to St. Catharines and announced the removal of the import duty.”

Jump ahead to September 2013, and a group of about 20 officers and crew from Algoma Central headed to the Nantong Mingde shipyards in eastern China to begin the nearly 15,000-nautical mile journey back to Canada. 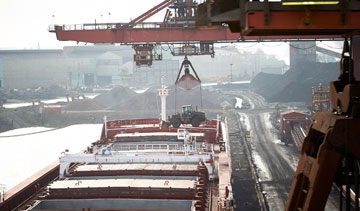 The M.V. Algoma Equinox will transport cargoes of grain and iron ore of nearly 30,000 tonnes each. PHOTO Algoma Central

The trip took 61 days before the Algoma Equinox arrived in Port-Cartier, Que., where it got straight to work, picking up its first cargo—29,000 tonnes of iron ore from ArcelorMittal Mining Canada for delivery to ArcelorMittal Dofasco in Hamilton, Ont.

She then embarked on a second cargo-carrying voyage, traveling northwest through the Great Lakes to Superior, Wis., to pick up another load of iron ore for delivery to Quebec City.

Grain products will also make up a great deal of the cargo carried in the ship’s five massive holds.

“The main trade of the Algoma Equinox will be moving grain products from Thunder Bay, (Ont.), and Duluth, (Minn.), to transfer elevators on the St. Lawrence River, and then returning upbound with iron ore from Port-Cartier and Sept.-Iles, (Que.), mainly to ArcelorMittal Dofasco’s steel mill in Hamilton,” Wight said.

Wight said the Algoma Equinox will carry 20 million tonnes of iron ore to ArcelorMittal Dofasco’s Hamilton plant over its lifespan.

The remaining seven sister vessels that make up the Equinox Class will be delivered throughout 2014 and 2015.

Algoma Central will own six of the vessels—two gearless bulkers including the Algoma Equinox, and four-self-unloading freighters—while the remaining two gearless ships will be owned by CWB Inc., formerly the Canadian Wheat Board.

The CWB-owned vessels will be operated by Algoma Central.