Shell Canada president Michael Crothers said the energy giant "saw an opportunity that was pretty special, to be part of a conservation effort," 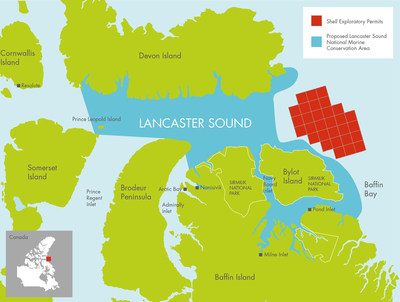 The 30 legally-questionable permits are being given to the Nature Conservancy of Canada, which will in turn hand them to the federal government.

“(The region) is adjacent to where the government has already said it would like to establish a conservancy, so our hope is that it will contribute to a much larger marine conservation area in the North,” said Shell Canada president Michael Crothers.

The permits cover 8,600 square kilometres north of Baffin Island at the eastern gate of the Northwest Passage. They also encompass the waters of Lancaster Sound, a particularly rich area of Baffin Bay that is home to belugas, narwhals, seals, walrus and many other Arctic animals.

Inuit who depend on the area for hunting have sought to have the area declared a marine conservation area since the mid-1980s.

The proposal is currently stalled by a debate over its borders. The federal government has outlined a smaller area that doesn’t include the permits, while Inuit and environmental groups have been holding out for a much larger protected zone that does.

In April, the World Wildlife Fund filed documents in Federal Court that argued Shell’s permits don’t even exist. The lawsuit claims the permits, purchased in the mid-1970s, were never renewed and have lapsed—a position that has found support among legal scholars.

Crothers said that lawsuit is unrelated to the company’s decision.

“We had initiated talks with the government and with (the Nature Conservancy of Canada) months ago. We don’t think that litigation is the way to go.”

Minutes from 2014 meetings between federal and Shell officials suggest the company was unwilling to part with the permits without compensation or without conducting at least some seismic tests.

Crothers suggested the company’s thinking has changed since then.

“People were talking more hypothetically, looking to get some return. But from my perspective, we saw an opportunity that was pretty special—to be part of a conservation effort.

“These are lands with really special ecological significance.”

Shell will receive no benefit for the donation, Crothers said.

John Lounds, president of the nature conservancy, said the donation beats waiting for the courts.

“I’m pleased we were able to work with Shell. They really understand the importance of Lancaster Sound.”

“This particular area is exceptionally important environmentally and for the local people. It’s an excellent decision by Shell and I applaud them for it.”

The federal government is likely to resume consultations with Inuit groups on the larger boundaries now made possible, Miller added.

“I see no obstacles in being able to announce this marine sanctuary in the relatively near future.”

The announcement comes on World Oceans Day and a week after a report from the Canadian Parks and Wilderness Society found the three North American governments are falling far behind their promises to protect marine environments.

Canada, Mexico and the United States have all pledged to protect at least 10 per cent of their waters. The report said less than one per cent of oceans off the continent are in fully functioning protected areas with permanent legal status and a management plan.

Adding an expanded Lancaster Sound would double the amount of ocean Canada has protected.