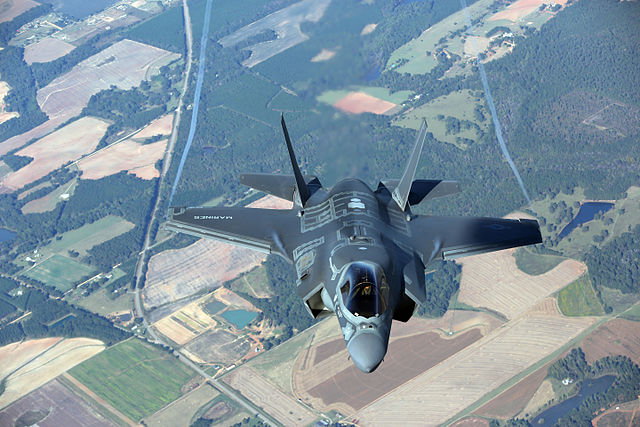 A variant of Lockheed Martin’s F-35 in-flight over the U.S. The aircraft program has been the source of controversy in Canada as the Air Force looks to replace its aging aircraft

OTTAWA—The Liberal government was warned late last year that a sole-sourced contract for big-ticket military purchases like fighter jets would be bound to drive up costs in the absence of an open competition.

The report, delivered to Public Services and Procurement Canada after the October election, found that choosing one company to provide equipment should be a “subordinate option” to a competitive process so taxpayers receive value for money.

The authors of the report, dated Dec. 17, say that developing better procurement practices is key if the Department of National Defence wants to go ahead with large-scale purchases, specifically referencing the CF-18 replacement process.

The team from PricewaterhouseCoopers listed a number of critical success factors to ensure companies didn’t “game” the system and drive up costs in order to also drive up profits in absolute dollars.

That list included reducing the government’s reliance on sole-sourced contracting and ensuring independent military specialists respected by government and industry reviewed costs to make sure they weren’t inflated.

The report, obtained by The Canadian Press under the Access to Information Act, raises a host of problems with the government’s procurement processes amid reports that the Liberals are prepared to go with a sole-sourced contract to purchase Super Hornet fighter jets from Boeing as an interim replacement for Canada’s aging CF-18s.

The government says there is looming capability gap when it comes to the CF-18s, which has caught observers and the opposition by surprise, since the previous Conservative government decided to spend hundreds of millions of dollars to keep the jets flying until at least 2025. The Commons defence committee was told last month it would cost about $400 million to overhaul the 77 CF-18s.

Without more details about the capability gap, observers say it is difficult to determine what gap exists, and how pressing it is in the case of the CF-18s, which were purchased in the 1980s and designed to last for 20 years.

Defence Minister Harjit Sajjan did little to dispel that report Tuesday when asked about the potential of buying the Super Hornets.

“These jets (the CF-18s) should have been replaced a long time ago,” Sajjan said after a June 7 cabinet meeting.

“I want to make sure that I have all the right information before we make any decision.”

Boeing doesn’t intend to shut down production of the Super Hornets for the foreseeable future, based on the U.S. Navy’s need for more aircraft and “near-term international opportunities” for sales, said Boeing spokeswoman Lisa Maull.

Even at its lowest price, the Super Hornet costs about $50 million each, not including life cycle costs like spare parts and maintenance. That would likely drive up the cost of the procurement to billions unless the federal government only purchases a handful of planes, said defence procurement analyst Dave Perry from the Canadian Global Affairs Institute.

The Liberals promised during the election campaign to not purchase Lockheed Martin’s F-35, and instead hold an open competition to replace the CF-18s.

That promise posed a problem for the government: How do you hold an open competition and exclude one candidate, especially one that may sue you for billions of dollars in lost revenues?

The Liberals have since appeared to backtrack on the promise and refused to publicly rule out the F-35 if it was deemed the best the option for the military.

Perry said the promise has forced the government to prove that any decision it makes on fighter jets isn’t based on political calculations.

“Their campaign platform was pretty definitive about saying that they weren’t going to buy one particular option, which I think was incredibly foolish of them to do so because it now means everything else they do is viewed through the lens of them having made that commitment,” Perry said.