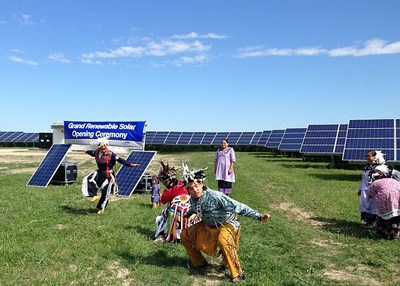 ST JACOBS, Ont—The largest contiguous solar farm in Canada, and one of the largest in North America has been completed, and has begun producing electricity for Ontario’s power grid.

The project was developed in partnership by Samsung Renewable Energy, Connor Clark & Lunn Infrastructure and Six Nations of the Grand River. S2E Technologies also played a role in facilitating an agreement between these major shareholders in the project and the engineering, procurement and construction provider, Canadian Solar Inc.

“Samsung and our partners are proud to complete this fourth project under our Green Energy Investment Agreement with the government of Ontario,” Shin Kim, CEO of Samsung C&T, said. “This project is now producing one hundred megawatts of clean energy, and has created hundreds of high-skilled jobs and millions of dollars in community investment, all of which are benefiting real people in Haldimand and across the province.”

Samsung noted Grand Renewable Solar will offset approximately 162,000 tonnes of CO2, compared to coal generation, the equivalent of taking 29,610 cars off the roads.

The solar power generated at GRS will be sold to the Ontario Power Authority under a power purchase agreement.