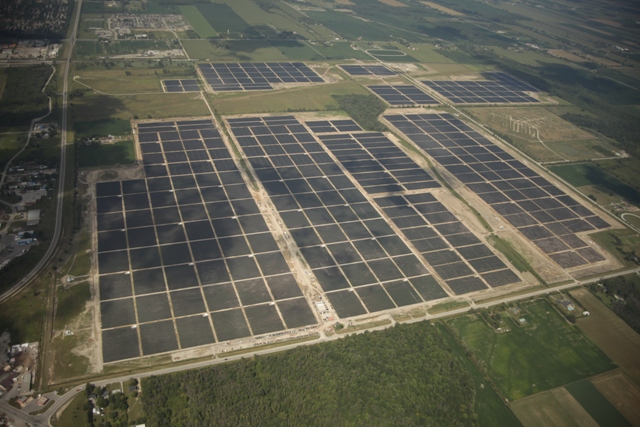 Enbridge’s nearby Sarnia Solar project. Though at 80 MW, the Sarnia plant is 60 per cent larger, both projects will inhabit similar western Ontario terrain. PHOTO: Enbridge

Having secured $190 million in debt financing, Samsung Renewable Energy Inc. and Connor, Clark & Lunn Infrastructure have announced plans to proceed to the construction phase on the 50 megawatt Southgate Solar Project.

Located in Southgate township between Guelph and Owen Sound, Ont., the solar farm will power the equivalent of approximately 7,600 homes each year.

“Samsung is proud to be a part of the Southgate community and excited about our partnership with the township that will create local jobs,” Steve Cho, vice-president of Samsung C&T Corp., said. “Samsung is dedicated to delivering meaningful economic benefits to communities where we are building clean, renewable energy projects.”

Along with employing more than 100 workers on-site during the construction phase, the Southgate project will use Ontario-made solar panels manufactured by Canadian Solar, as well as inverters built by SMA America in Toronto.

Samsung said crews will begin work on the project shortly with construction expected to be completed by late 2016.