Energy sector will not support thousands of jobs if government continues with "failed" policies, Notley says 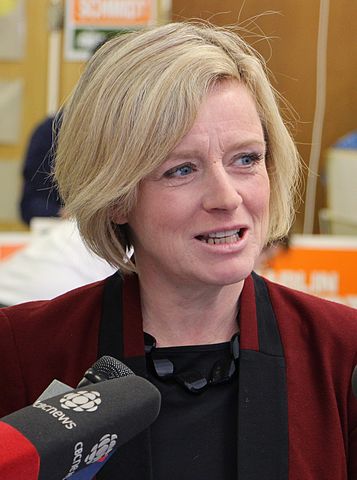 TORONTO—Premier Rachel Notley says Canadian families are paying for the failure of former conservative governments in Ottawa and Alberta to deal with climate change.

And she warns the energy sector will not be able to support thousands of well-paying direct and indirect jobs across the country if governments continue with discredited and failed policies of the past.

“Ignoring climate change is no way to develop the energy industry,” the Alberta premier said in a prepared speech she gave Thursday evening at the Broadbent Institute Progress Gala.

“Canada needs to become a world leader on climate change – a world leader instead of the world’s political football, as we were at the hands of our principal market and partner last week.”

Last Friday U.S. President Barack Obama denied a permit for the Keystone XL pipeline, a project that would have transported huge volumes of bitumen from Alberta’s oilsands to refineries on the U.S. Gulf Coast.

Notley said since the NDP took power last May it has been working on a climate change strategy for Alberta. Some details are to be announced before she leaves later this month for the UN conference in Paris.

She said her government’s priorities include using less coal to fuel electricity generating plants, introducing an energy efficiency program and other measures to reduce carbon emissions.

Alberta has already announced that it will double its carbon levy on large industrial emitters within two years.

“We will do what needs to be done,” she told the crowd.

“So that Alberta and Canada can stand together before the world in Paris, and for decades to come, as one of the world’s most progressive and environmentally responsible energy producers.”

Notley said her government is also determined to challenge what she called other “orthodoxies” of the past by pushing for better policies for child care, parental leave and a higher minimum wage.

She said setting a longer term goal for balancing Alberta’s budget will allow her government to support key areas such as health and education without damaging basic public services.

“A plan in the great tradition of prairie progressive government,” she said. “A tradition that stands as Canada’s best alternative to the wrong priorities, failed policies and bad decisions of conservative rule.”