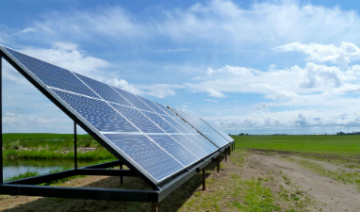 Alberta is working to expand its clean energy footprint as it plots its transition away from coal-fired generation.

The two programs, to which the province will contribute more than $5 million, will offer rebates to municipalities or farmers who build solar energy projects.

“We must take action at all levels in combatting climate change – federally, provincially and locally,” Shannon Phillips, the province’s minister of environment, said. “This investment will spur economic growth and help with the transition to cleaner sources of electricity, which will protect our health.”

For municipalities, the province has earmarked $5 million for the Alberta Municipal Solar Program. The clean energy program will offer cities that install solar panels on city buildings a rebate of up to 75 cents per watt of electricity, up to a maximum of $300,000 per project.

The province says the program will not only incentivize municipalities into going green, but also create jobs in the construction and renewable energy supply chain.

The government has also set aside $500,000 to help Alta. farmers invest in solar energy as part of its On-Farm Solar Management program.