The goal of the initiative is to have panels on 10,000 Alberta homes within three years, a commitment that could reduce greenhouse gas emissions by the equivalent of taking 100,000 cars off the road 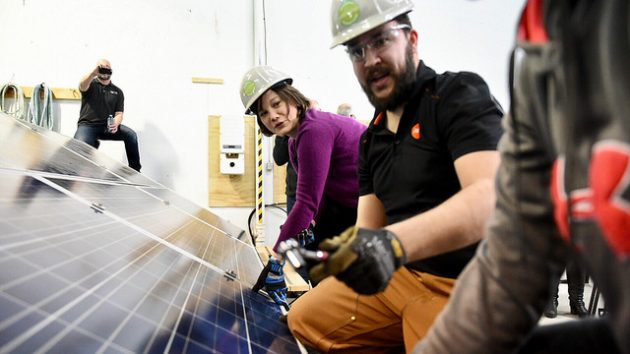 EDMONTON—The Alberta government is putting up $36 million over two years for a rebate program to encourage rooftop solar panels on homes and businesses.

Environment Minister Shannon Phillips says more details are to come, and the rebates are to be available as early as this summer.

Phillips says the use of solar panels has doubled since 2015, and the goal is to have new panels on 10,000 Alberta rooftops within three years.

The program is expected to create 900 jobs in the next few years and reduce solar installation costs by up to 30 per cent for homes and 25 per cent for businesses.

The program is part of Alberta’s larger climate change plan that includes a broad-based carbon levy on home heating bills and gas at the pumps.

According to John Gorman, the president and CEO of the Canadian Solar Industries Association (CanSIA), the new rooftop solar initiative and overall energy shift are helping the province re-brand.

“Alberta, a province best known for its oil and gas industry, is also rapidly becoming western Canada’s leader in renewable energy,” he said.

“More Albertan households and small businesses will now be empowered to go solar, strengthening local economies and creating jobs. The government has delivered on their word and the Canadian solar industry is ready to deliver in return,” Gorman added.