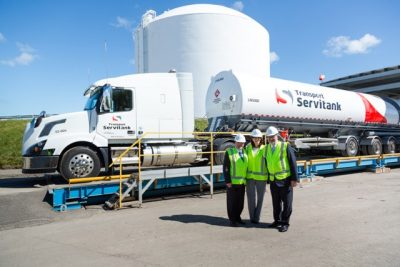 Representatives of Gaz Métro, the province of Quebec and Stornoway commemorated the opening of the natural gas shipping lane north June 13. The project will see the gas distributor ship LNG more than 1,000 kilometres north to the remote Renard mine. PHOTO: Gaz Métro

MONTREAL—Stornoway Diamond Corp.’s Renard mine, more than 1,000 kilometres north of Montreal, is poised to receive its first shipment of liquefied natural gas.

The first mining company to commit to using cleaner-burning LNG instead of diesel fuel as part of a multimillion-dollar Gaz Métro and province of Quebec initiative, Stornoway will reduce its greenhouse gas emissions by 43 per cent with the shift.

Commemorating the opening of the shipping lane, Quebec’s Minister of Energy and Natural Resources, Pierre Arcand, said natural gas is a “profitable transition energy” that will play a significant role for companies in Northern Quebec in the coming years.

With the isolated mine hundreds of kilometres from Gaz Métro’s traditional natural gas network, the Quebec distributor will ship the LNG to the Renard project by truck from its liquefaction, storage and regasification plant in Montreal.

“For a number of years, Gaz Métro has wanted to supply natural gas to regions located far from its gas network, particularly Northern Québec, so as to offer them access to a driver of economic development that is cleaner than oil,” Sophie Brochu, president and CEO of Gaz Métro, said. “Stornoway has made the Renard mine a concrete example of an innovative mining project that is giving Quebec visibility in the mining world.”

By opting for a power plant that runs on natural gas instead of diesel, Stornoway will reduce its overall emissions as well as its output of nitrogen dioxide and sulfur dioxide. After more than two years of construction, beginning in 2014, the diamond mine is expected to begin operations later this year. It cost approximately $775 million to build.

Following the inaugural shipment to its first northern customer, Gaz Métro hopes to continue expanding the project. The province of Quebec took a $50 million stake in the distributor’s LNG business in 2014 to support increased use of natural gas.