by Kimberly Pierceall, The Associated Press  May 6, 2015

The truck's designers aren't ditching drivers. In this new autonomous world, the driver would be more of an on-board logistics manager 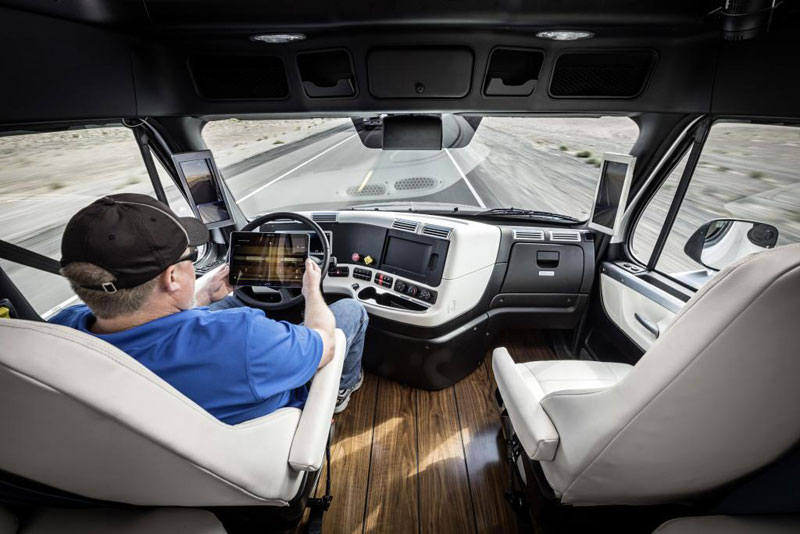 In the cabin of the Freightliner Inspiration Truck, the Highway Pilot system assists the driver. PHOTO: Daimler Trucks and Buses

LAS VEGAS—Its name is “Inspiration” and Daimler Trucks says it’s the first ever self-driving semi-truck licensed to drive on public roads _ in this case Nevada’s highways _ not only for testing, but business, too.

Taking a line from astronaut Neil Armstrong, Dr. Wolfgang Bernhard of Daimler Trucks and Buses told the crowd bused to the site from Las Vegas for the news conference that they were about to witness “a short drive for man and a long haul for mankind.”

“We are really showing that we’re at the cradle of innovation,” Nevada Gov. Brian Sandoval said Tuesday after helping affix the state’s automated vehicle license to the truck.

The truck isn’t quite a working reality, though. For one, Daimler isn’t taking customer orders just yet.

The company, if it was in the physical logistics business, could ship goods between Reno and Las Vegas on the state’s highways if it wanted to thanks to its state license, a first of its kind for an autonomous semi-truck. But it won’t be doing that. Instead, it will be conducting more tests and showing off what the truck can do.

“You have to give people something to play with,” said Daimler Trucks North America president and CEO Martin Daum, who society might forgive a number of deaths caused by tired truck drivers at the wheel, but they would never forgive a single fatal crash blamed on a fully automated big rig.

That’s also why the company has no intention of ditching drivers. Instead, in this new autonomous world, the driver would be more of an on-board logistics manager.

Still, “we believe that before passenger cars will be cruising around in suburbs, long before that, you will be seeing heavy trucks running on the interstate highways,” Bernhard said. There are no intersections, no red lights, no pedestrians, he said, making it a far less complex trip for a truck to make.

For now four states, including Nevada and the District of Columbia, certify testing autonomous vehicles on public roads as long as a human driver is behind the wheel. A few others are keen on allowing the tests.