SED Systems of Saskatoon, Ottawa-based ADGA-RHEA Group both contributed to landing of spacecraft on surface of comet 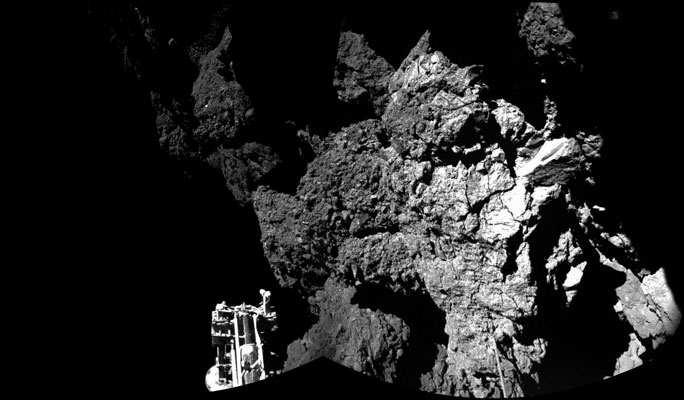 The Philae lander on the 67P/Churyumov-Gerasimenko comet. PHOTO ESA

MONTREAL—A pair of Canadian companies were bursting with pride after playing small but important roles in the historic landing of a spacecraft on the surface of a comet.

It’s the first time such a feat has been performed.

SED Systems of Saskatoon built three ground stations used by the European Space Agency (ESA) to communicate with the Rosetta spacecraft, which sent its Philae lander down to the 67P/Churyumov-Gerasimenko comet.

The size of the 100-kilogram Philae lander, which was named for an island in the Nile, has been compared to a small fridge.

“I’m really proud of our team,” SED business manager Denis Sirois said just hours after Philae touched down on the odd-shaped comet, which is about four kilometres wide.

“It’s kind of a testament to our capabilities for a small company (250 employees) out here on the Prairies.”

Sirois went on the Internet to watch the ecstatic reaction of scientists at the European Space Operations control room in Darmstadt, Germany.

He could only imagine what they were thinking.

“A lot of these scientists and mission planners spent a good portion of their careers working on this, so for them it’s practically like their child,” he said.

Sirois described the successful landing as another milestone in mankind’s extension into space.

“It’s really cool that this is actually happening and of course SED is happy to have had a role in that, so we’re very proud today,” he added.

The Rosetta spacecraft was more than 500 million kilometres away from Earth when it released its Philae lander.

That’s more than 1,000 times the distance between Earth and the moon.

Managing director Andre Sincennes pointed out that the company’s engineers and scientists have been involved since the early days of the mission.

“Basically, going back to 2000 (to) 2002, we worked very closely with the European Space Agency to develop that application and now it’s been proven over the last 12 years and it’s being used in almost every single mission,” he noted.

Sincennes said the software came into play during a crucial period three months ago.

Rosetta was put into hibernation in June 2011 to limit its consumption of solar power.

The MOIS technology helped to reawaken the satellite last January—a process that required Rosetta’s 11 science and 10 lander instruments to be reactivated and readied for scientific observation.

“Basically, in excess of 1,000 procedures had to be reviewed, revisited, changed, adapted and realigned,” Sincennes said.

Each of the manoeuvres was critical in making Rosetta’s rendezvous with the comet possible.

Sincennes said ADGA-RHEA officials were thrilled about the final outcome.

“There’s so much pride and all that pride from a Canadian standpoint, from a European standpoint, comes from the effort—the relentless effort conducted and performed by our engineers, our scientists, in that 10-year-plus period,” he added.

ADGA-RHEA has about 600 employees in Canada and another 200 in Europe.

Sincennes said the system-engineering company has been established in Canada for 47 years and has had a design facility in Montreal since 1970.