Amazon to open second Vancouver office, but it’s not the coveted HQ2

The e-commerce giant's second office in downtown Vancouver will create 1,000 new jobs; it's expected to cover 150,000-square-feet and open by 2020 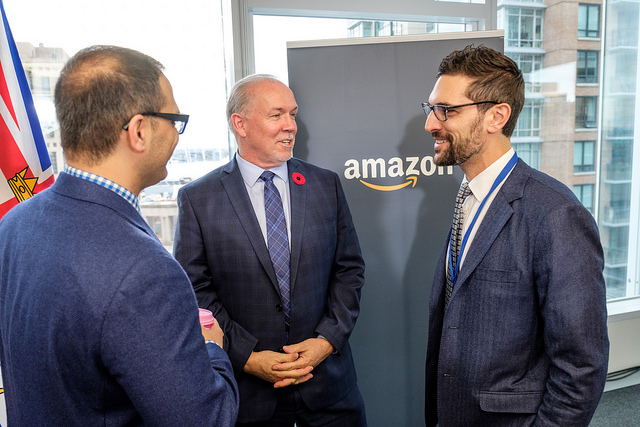 VANCOUVER—Amazon will open a second corporate office in Vancouver, doubling its employee count in the western city, but it has yet to announce where the tech titan’s highly sought-after second headquarters will land.

“We’re so excited to be here and be growing,” said Jesse Dougherty, Amazon’s Vancouver site lead, during a morning event at the company’s Vancouver office late last week. “It’s thrilling.”

The new jobs will include tech and non-tech jobs, such as software development, human resources and marketing roles.

While Dougherty expressed excitement about Amazon’s quick growth in his hometown, he remained mum on the possibility the company may choose Vancouver as the site for its planned second headquarters, dubbed HQ2.

“I have no information on HQ2,” he later told the media.

An Amazon spokesperson added the announcement is separate from the second headquarters plans and there’s no connection between the two.

B.C. Premier John Horgan called it “a great day” for the tech sector.

“I believe it’s an opportunity for us to look forward again to other challenges and other opportunities presented by Amazon,” he said at the event.

The premier touted the province’s post-secondary institutions and diversity as a big draw.

Mayor Gregor Robertson also hinted at an expanding relationship with the tech firm.

“We are thrilled to be an important city on Amazon’s world map and even more so going forward,” he said.

Robertson later told the media every job Amazon creates in Vancouver boosts its chances of future growth and the city’s strong partnership with the company is an advantage.

“Many other cities competing don’t have any Amazon jobs, and we now have thousands,” he said.

Robertson acknowledged absorbing the company’s second headquarters—along with up to 50,000 new, high-paying jobs it promises—could be challenging, but noted the US$5-billion investment would come in phases spread out over several years giving the winning city time to prepare adequately.

Vancouver would have to continue to increase its housing supply, invest in its transit system and boost its education system, particularly the number of STEM graduates, he said.

In addition to the two B.C. hopefuls, Toronto, Ottawa, Halifax, Calgary and several others submitted proposals earlier this month.