Trudeau was in Vancouver to both tout the Trans Mountain pipeline project as a solution to B.C.'s gas price woes and to celebrate Amazon's new expansion in the city, expected to create 3,000 new jobs 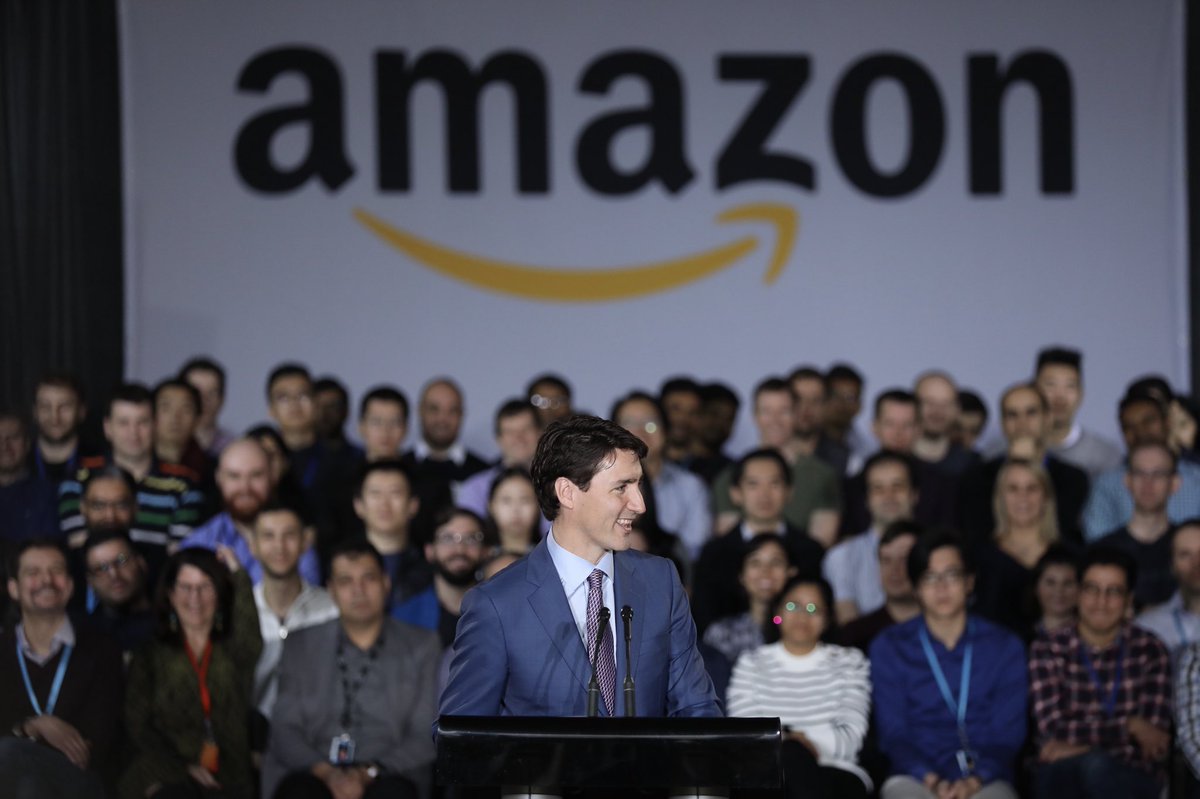 Amazon is building a 38,000-square-metre tower on the site of Vancouver’s old post office headquarters. PM Trudeau had this to say about the news: “Today’s announcement is a testament to Canada’s highly-skilled, diverse workforce and tremendous potential as an innovation and tech hub.” PHOTO: Justin Trudeau/Twitter

VANCOUVER—Prime Minister Justin Trudeau promoted the expansion of retail giant Amazon’s technology hub in Vancouver on Monday as he used the region’s record-high gas prices to continue selling the expansion of the Trans Mountain pipeline.

“I know that part of the challenge that folks across the Lower Mainland and B.C. are facing right now is related to the fact that we are connected so closely to the U.S. market and to what happens in the United States,” Trudeau said as the price of gas exceeded $1.60 a litre in the Vancouver area.

Canada currently ships oil only to the United States and loses about $15 billion annually by not exporting it to other markets through an expanded pipeline, he said.

“That level of dependency at any time would be difficult but right now at a time of protectionism and unpredictability in the United States it makes sense to diversify our markets to new markets across Asia,” Trudeau said.

“We know that the alternative to a new pipeline would be more oil by rail, more oil by trucks. That’s not what anybody wants.”

British Columbia’s former Liberal government approved the pipeline project, but the current NDP government has asked the province’s highest court to determine if B.C. has the power to enact environmental laws that would restrict the flow of diluted bitumen through the province.

Getting the pipeline twinned involves “collaboration and respect for the provinces,” Trudeau said. “We’ve moved forward in a partnership way right across the country and we’ve demonstrated that we understand that the national interest involves getting our resources responsibly to new markets but it also involves, for example, putting a price on carbon pollution right across Canada.”

Trudeau said such incentives, along with lower-emissions vehicles and public-transit investments, lead to a cleaner environment and further economic growth, with projects such as the Trans Mountain pipeline.

It was a day of talking commerce for the prime minister, who attended an announcement about Amazon’s expansion in Vancouver and said innovation will help drive economic growth and improve the lives of middle-class Canadians.

He also said he’s optimistic that the United States understands extending aluminum and steel tariffs to Canada would be a bad idea for the economies of both countries. The U.S. was expected to impose tariffs internationally on Tuesday.

He said 3,000 new employees working there in high-tech positions would be focusing on e-commerce technology, cloud computing and machine learning.

The building’s architectural heritage will be preserved, and the tower is expected to open in 2022, Dougherty said inside the former Canada Post building.

“We chose to build and grow in Canada because we recognize the diverse and exceptionally talented workforce here,” he said.

“As a homegrown British Columbian and a software engineer, I am so proud of living and working in a city that is recognized worldwide as a first-rate global tech hub.”

Seattle-based Amazon opened its first software development site in Vancouver in 2011 and now has more than 1,000 employees.

Dougherty said the company will build on its relationships with top Canadian universities, which he said are producing some of the best computer engineering students in the world.

Premier John Horgan said Amazon’s expansion in Vancouver is evidence that the province is a sound place to invest, though that has been questioned in connection with B.C.’s legal action involving the Trans Mountain expansion as it asks its highest court to determine whether it has authority to control shipments of diluted bitumen through the province.

“This investment will advance B.C.’s well-earned reputation as an innovation hub and will promote growth in all sectors of our economy, in all regions,” Horgan said in a joint statement with Jobs, Trade and Technology Minister Bruce Ralston.

Amazon is expected to announce its second North American headquarters, dubbed HQ2, sometime this year, with Toronto as the only Canadian city on the list of 20 finalists.