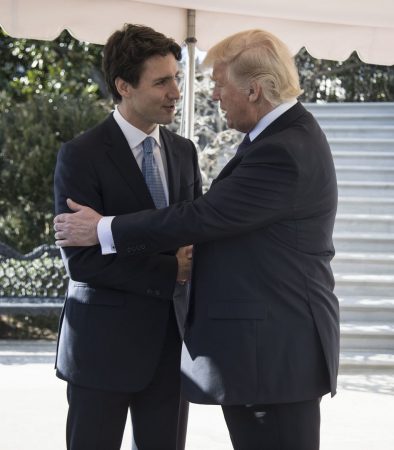 A full day after Trump first publicly discussed the possibility during remarks at the White House, as the COVID-19 pandemic mushroomed in the U.S., Canadian officials were pressing their American counterparts to find out what military plan — if any — was taking shape and how it might affect Canada. Throughout, the Trudeau cabinet has remained in close contact with Kirsten Hillman, its newly-appointed ambassador to the U.S.

“We continue to engage closely in back and forths with the American administration on many, many issues around the border, and when we have more information, we’ll share it,” Prime Minister Justin Trudeau said March 27 during this daily televised briefing to Canadians on the pandemic.

“We have expressed to the United States that it would be a mistake to position troops near the Canadian border, and we certainly hope that they’re not going to go through with that.”

Deputy Prime Minister Chrystia Freeland was also forceful in denouncing the idea, saying she’d been keeping in close contact with Hillman on March 26 and March 27.

“Canada has continued to express clearly and forcefully its view that there is no logical reason to militarize our border with the United States and we have been very clear also that such an action would damage our relationship,” Freeland said.

Ottawa was still scrambling to react to the U.S. proposal, which appeared aimed at bolstering the work of its own domestic border service. But the potential scope or extent of any U.S. plan to deploy its military along the world’s longest undefended border remained unexplained.

The two countries already have a mutual ban in place on non-essential travel, but the movement of trade, commerce and cross-border workers has been allowed to continue.

U.S. President Donald Trump added to the confusion in remarks at the White House late March 26, when he said — without any explanation — that the U.S. already has troops “along the border” with Canada.

Trump then went on a riff about one of his favourite topics — tariffs — and restated old concerns about cheap Chinese steel coming into the U.S. market from Canada.

Canada and Mexico have resolved a major standoff with the Trump administration after it imposed punitive tariffs on their steel and aluminum exports to the U.S. The U.S. had concerns about countries such as China using Canada and Mexico as a conduit to dump cheap steel into the American market. Canada and Mexico are now closely monitoring their foreign metals imports to avoid that from happening — and to prevent the U.S. from reinstating tariffs.

“You know, I charge a lot of tariff for the steel. And it’s been great for our steel companies because now they can really go — you look at what’s happened with steel. It’s been pretty incredible. But we’ve taken in billions and billions of dollars in tariffs on steel, and much of it comes in from China, but they can come through the Canadian border, too,” said Trump.

Earlier March 26, Freeland noted that countries around the world, including Canada, have been responding with uncharacteristic speed and urgency to an escalating global emergency, which involves discussing any and all measures, no matter how drastic, even if they don’t come to fruition.

The current, mutual ban on non-essential travel by Canada and the U.S. reflects that the countries realize the economic importance of avoiding a complete shutdown at the border. For Canada, keeping trade moving is essential — the U.S. is its largest trading partner, as the economies of the two countries are deeply intertwined.

Trudeau reiterated March 27 in Ottawa that Canada and the U.S. have the longest unmilitarized border in the world and it is in the interests of both countries to keep it that way.

Trump has long been seized with securing his country’s southern border with Mexico, and has recently been talking about fortifying those efforts under the pretence of protecting Americans from the novel coronavirus.

Trump has also made it clear that in an election year, he is eager for a return to economic normalcy, and sooner rather than later. The April 12 Easter weekend is his hoped-for timeline, a date that has left public-health officials incredulous.

Meanwhile, Freeland said March 27 she is holding other “urgent” discussions with U.S. officials over concerns that American border agents could deport asylum seekers on the Canada-U.S. border turned back by Canada under the new border agreement.

On March 23, the U.S. announced a 30-day agreement with both Canada and Mexico that includes immediately returning any illegal migrants to the countries from which they arrived, or to their countries of origin if that isn’t possible, rather than holding them at U.S. facilities.

Trudeau said last week anyone crossing between the two countries on foot to claim asylum will be turned away as part of the broader deal to close the border to all but non-essential traffic, raising questions about whether they would be returned to their country of origin.

Freeland said Canada’s international obligations on refugees, include a commitment to “non-refoulement” — not sending refugees back to countries where they could face torture or persecution.

“We are aware of the problems of refoulement and it was, and continues to be, important for Canada to have assurances that that would not happen to people returned to the United States,” Freeland said.

“It is important for us to abide by our international commitments when it comes to refugees and we are very alive to concerns around refoulement.”

— with files from Teresa Wright