The U.S. and Canada agreed to end the “ongoing trade concern" in a pair of side letters to the new United States-Mexico-Canada Agreement 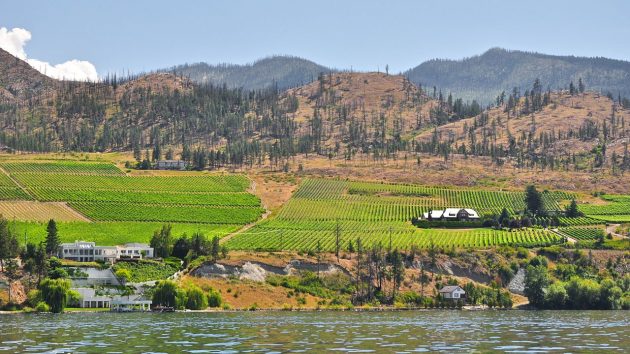 PHOTO: Kelowna Vineyards from the Okanagan Lake/Stuart via Flickr

VANCOUVER – Dirty Laundry winery in Summerland, B.C., estimates it will sell fewer bottles of red and white in grocery stores as shelf space previously reserved for local companies will soon be shared with U.S. imports.

“I don’t think it’ll be devastating, but it will certainly impact us,” said Paul Sawler, the winery’s director of sales and marketing.

B.C.’s wine industry will soon lose its advantage of dedicated grocery in-store shelf space – a practice deemed discriminatory through the lens of U.S. President Donald Trump’s America-first ethos – as grocers will have to make room for out-of-province offerings.

But with the Nov. 1, 2019 deadline for implementation more than a year away, those in the industry say it’s difficult to know what the change will look like and just how hard it’ll hit local vintners.

Imported wines currently can only be sold at the province’s grocery stores in a so-called store-within-a-store model, which the U.S. has called discriminatory and complained about to the World Trade Organization alleging unfair sales practices.

The U.S. and Canada agreed to end the “ongoing trade concern” in a pair of side letters to the new United States-Mexico-Canada Agreement reached late Sunday night.

The change is not surprising, but is disappointing, said Miles Prodan, the CEO of the B.C. Wine Institute, a not-for-profit organization that represents the interests of the province’s wineries.

There are 271 licensed grape wineries in the province, according to the institute, and the industry contributes $2.8 billion annually to the B.C. economy.

The majority of the wineries are small in scale, he said, producing about 5,000 cases a year or less.

The grocery-store model was the only real channel many of these smaller operations had to access consumers, he said.

“The growth of the sales for small wineries increased significantly,” he said.

“Prior to that, and it continues to be, very difficult for small wineries to access retail stores,” he said, adding everyone, including foreign wines, beer and spirits, is fighting for limited space within existing stores.

For Dirty Laundry, which this year will produce 30,000 cases, it’s not a critical source of sales, but an important market and the winery’s fastest growing one, Sawler said.

It accounts for 15 per cent of the company’s sales in the province, not including on the vineyard’s premises, he said. The company anticipates its sales in the channel will fall as a result.

“But how much it will impact us? You know, it’s anybody’s guess at this point,” he said, adding a lot depends on how the grocery chains handle the change.

The grocers themselves don’t yet know what the future will look like.

Only 29 grocery stores in the province sell B.C. wine in aisles as the practice requires a special licence.

Save-On-Foods offers provincial wine at 19 of its stores.

“We don’t believe this change in legislation will affect our operations and it definitely does not affect our long-standing commitment to supporting our local B.C. wineries and the B.C. agri-food industry,” the chain wrote in an email.

Loblaw Companies Ltd. sells B.C. wine at 10 of its stores, but doesn’t have any further licences and thus no plans for expanding the practice at the moment, spokeswoman Catherine Thomas wrote in an email.

The company doesn’t have enough information about the changes to provide any comment on how its in-store wine stock will change come November 2019, she said.