As Trump fumes over leaks, Woodward pushes back on criticism

by Catherine Lucey And Jonathan Lemire, The Associated Press  September 11, 2018 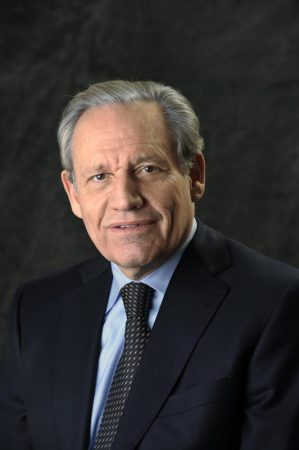 PHOTO: Bob Woodward is regarded as one of America’s preeminent investigative reporters and non-fiction authors/bobwoodward.com

But while Trump continues to insist privately that he wants leakers punished – in particular, the author of an unsigned New York Times opinion piece – it remained unclear if his administration would mete out any discipline. Spokeswoman Sarah Huckabee Sanders said no lie detectors were being used to smoke out the writer of the op-ed, though she insisted the West Wing would like to see an investigation.

Sanders said it’s up to the Justice Department to make that determination. “But someone actively trying to undermine the duly elected president and the entire executive branch of government, that seems quite problematic to me and something they should take a look at,” she said.

A White House official has said Trump was just venting over the essay and wasn’t ordering federal prosecutors to take action. It also doesn’t appear that the essay revealed any classified information, which would be a crucial bar to clear before a leak investigation could be considered. The Justice Department said it will not confirm or deny investigations.

It appeared to be another instance of the president versus the administration, as Trump proceeded on one track while the agencies largely moved on another. There was fear among some Trump advisers that if the president felt that his staff or the Justice Department was not carrying out his order to find the leakers, then he could feel compelled to make changes.

At a White House press briefing, Sanders slammed the book “Fear,” from veteran journalist Bob Woodward, as “careless and reckless.”

Woodward staunchly defended his work, saying on NBC’s “Today” show that Defence Secretary Jim Mattis and White House chief of staff John Kelly “are not telling the truth” when they deny making disparaging remarks about Trump attributed to them.

“These are political statements to protect their jobs,” Woodward said.

Trump officials have rushed to distance themselves from the op-ed and from Woodward’s book, both of which depict a White House mired in dysfunction, with aides disparaging the Republican president and working to prevent him from making disastrous decisions.

It was not clear how aggressive White House efforts were to root out the op-ed writer, though a person close to the White House who was not authorized to speak publicly said officials had focused in on a few names.

Some Trump aides, including lawyer Rudy Giuliani, have suggested that Trump would be within his authority to order a formal investigation of it. But it would set off alarm bells throughout Washington if the president were to mobilize the Justice Department to investigate a matter in which no crime was committed or classified information disclosed.

Trump spent the weekend complaining about the book as well as the op-ed writer. He argued that the person purposely put the piece in the Times to anger him, and he has continued to focus on identifying and firing the author, even as some advisers have urged him to let the matter go, said a person familiar with the president’s thinking but not authorized to discuss private conversations.

Trump tweeted Monday that he has been subjected to “Phony books, articles and T.V. ‘hits’ like no other pol has had to endure.”

Amid the drama, former staffer Omarosa Manigault Newman sought to seize some of the spotlight by releasing a recording she said was of Trump talking to junior aides during a communications meeting. Trump jumps from topic to topic, talking about the real “Russia story” involving his Democratic opponent, Hillary Clinton; the deadly Niger ambush on American soldiers; and economic gains.

The op-ed was not the only thing on Trump’s mind as he called around to advisers over the weekend, according to two people familiar with the conversations. He told allies that he was certain that his stance on the national anthem controversy contributed to the NFL’s lower television ratings for its Thursday night opener – though ratings were largely up for the league’s first Sunday of games.

Trump also derided his predecessor’s return to politics. While the president expressed annoyance that Barack Obama was taking credit for the nation’s economic success, he told one adviser that the former president’s increased visibility would give Trump more chances to attack a figure who remained very unpopular with his base.

Set for public release Tuesday, “Fear” has thrown an already chaotic White House into disarray. On Monday, it was ranked as the top-selling book on Amazon.

Trump tweeted that “the Woodward book is a Joke – just another assault against me, in a barrage of assaults, using now disproven unnamed and anonymous sources. Many have already come forward to say the quotes by them, like the book, are fiction. Dems can’t stand losing. I’ll write the real book!”

Kelly is quoted calling Trump “an idiot,” and Mattis is quoted saying Trump has the understanding of “a fifth- or sixth-grader.” Both deny the statements.

Woodward, who has shared in two Pulitzer Prizes, staunchly defended the integrity of his reporting and said the book “is as carefully done as you can do an excavation of the reality of what goes on.”