The hybrid-electric powertrain charges its batteries when traveling downhill or braking, and tracks road elevation to determine whether to use the diesel engine or the electric motor 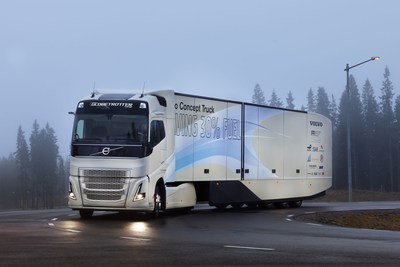 The Volvo Concept Truck is one of the first of its kind to use both a diesel engine and an electric motor. PHOTO: Volvo

The hybrid powertrain works by recovering energy when driving downhill on slopes steeper than one per cent, or when braking. The recovered energy is stored in the vehicle’s batteries and used to power the truck in electric mode on flat roads or low gradients.

An enhanced version of Volvo Trucks’ driver support system has been developed specially for the hybrid powertrain, which analyzes upcoming topography to calculate the most economical and efficient choice between the diesel engine and the electric motor, as well as the optimal time to use the recovered energy.

The Volvo Concept Truck is the result of a bilateral research project between the Swedish energy authority Energimyndigheten and the U.S. Department of Energy (DOE). A similar hybrid concept was developed by the U.S. DOE for use in North America.

In long haul transportation, it’s estimated that the hybrid powertrain will allow the combustion engine to be shut off for up to 30 per cent of the driving time. This will save between 5-10 per cent in fuel, depending on the vehicle type or specification, and its drive cycle.

This truck also has the ability to drive in full electric mode for up to 10 kilometres.

“Today, long haul transport accounts for a significant share of the total energy consumption in the transportation sector. Using hybrid technology, the potential reduction in fuel and emissions is considerable and an important step towards reaching both our and society’s environmental goals for the future,” said Lars Mårtensson, director of Environment and Innovation, Volvo Trucks.