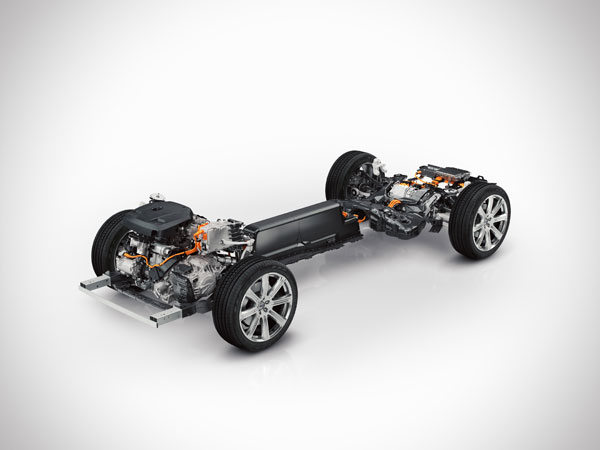 GOTHENBURG, Sweden—Volvo Car Corp. has unveiled the internals of its all-new XC90 sport utility, and it looks twice as good as the last go-round.

While the Swedish automaker has yet to pull the cover off the design of the next-gen XC90, the drivetrain of the mid-size SUV will feature an optional “twin engine” powerplant that features an electric motor alongside a turbocharged and supercharged gas-powered engine.

The top-of-range plug-in-hybrid XC90 will sport a T8 badge to boast of its boosty new 2.0-litre four-cylinder engine that will power the front wheels, while an 80-horsepower electric motor will handle the job out back.

The twin-boosted gas engine will use the supercharger at the bottom end of its torque band to make up for turbo lag, while the turbocharger will take over as airflow builds up.

With the simple push of a button, drivers will have the option to switch to pure electric power, with an estimated range of about 40 kilometres.

The combined twin engine design produces roughly 400-horsepower and 470 ft.lbs. of torque, according to Volvo.

“With our new Drive-E powertrains, we have created a family of intelligent petrol and diesel engines with power curves that give exciting driveability at the same time as delivering world beating fuel economy,” Volvo senior vice-president of research and development Peter Martens said in a statement.