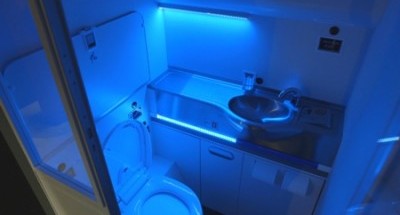 EVERETT, Wash.—Unable to do much to alleviate the cramped legs of passengers stuck in compact airliner seating, engineers at Boeing Co. are taking aim at the next best thing—making the few minutes frequent flyers do venture out of their seats during a flight a little more pleasant.

The company has developed a self-cleaning washroom that can purge itself of 99.99 per cent of unwanted germs in just three seconds. Designed to make passengers a little less leery about swinging open the lavatory door while cruising at 35,000 feet, the system uses ultraviolet light to eliminate micro-organisms.

“We’re trying to alleviate the anxiety we all face when using a restroom that gets a workout during a flight,” Jeanne Yu, Boeing Commercial Airplanes director of Environmental Performance, said. “In the prototype, we position the lights throughout the lavatory so that it floods the touch surfaces like the toilet seat, sink and countertops with the UV light once a person exits the lavatory. This sanitizing even helps eliminate odors.”

The technology, which Boeing says will require further study before it can be offered its airline clients, uses Far UV light—a type of UV distinct from the UVA or UVB used in tanning beds. While the system only bathes the washroom surfaces in light after a passenger has left, it has been shown to significantly minimize the growth and transmission potential of micro-organisms.

Along with the UV system, Boeing has also introduced a number of touchless features into its high-tech washroom, including a hands-free faucet, soap dispenser, trash flap, hand dryer, as well as an automated toilet lid and seat. The plane maker is looking into a hands-free door latch and vacuum vent for the floor as well.

“Some of the touchless features are already in use on some Boeing airplanes today,” Yu added. “But combining that with the new UV sanitizing will give passengers even more protection from germs and make for an even better flying experience.”

Though it will likely be a few years before germophones can book a long-haul flight anxiety-free, the microbe-free future looks promising.