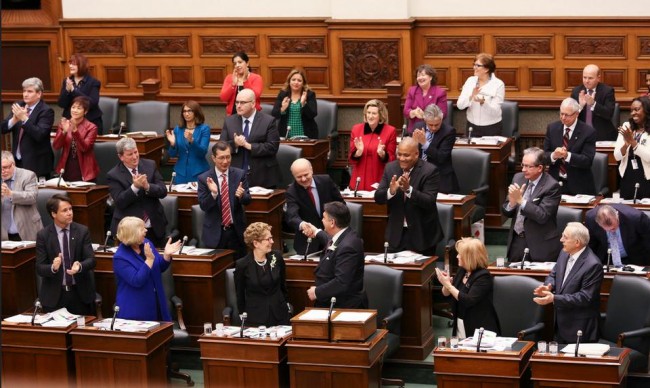 TORONTO—Ontario’s fiscal watchdog says it will likely be challenging for the province to maintain balanced budgets beyond 2017-18.

The Liberal government plans to eliminate its $5.7-billion deficit in that fiscal year and expects to stay in the black the following year.

But it is relying on “relatively optimistic assumptions for revenue growth,” of an average increase of 5.1 per cent per year to 2017-18, which is “much higher” than the average annual growth over the past four years,“ the Financial Accountability Office’s chief economist says.

This year’s budget reported $2.7 billion in revenue across a number of different categories from the partial sale of Hydro One , but the government hasn’t provided complete details of the fiscal impact of the sale, West wrote.

“This principle of transparency that the Liberals had promised around the sell-off went out the window a long time ago,” she said.

The budget also assumes more money from asset sales in 2016-17 and the following year, to the tune of $700 million and $800 million respectively. But, as West wrote, it did not indicate where that money would come from, whether it is further Hydro One tranches or other assets.

Progressive Conservative finance critic Vic Fedeli said the FAO report confirms that the government is getting to balance with one-time money.

Finance Minister Charles Sousa said the asset sale money is dedicated to an infrastructure fund and cap-and-trade revenue is dedicated to green projects, “So it’s not something we’re relying upon to come to balance.”

There are measures built in to accommodate for shocks and the “prudent” revenue projections are based on advice from private-sector economists, Sousa said.

The government often touts its path to balance as largely through managing program spending, but West said those details “remain vague and the results uncertain.”

“Ontario is currently in its fifth year of public sector spending restraint and pressures for new spending continue to build,” he wrote.