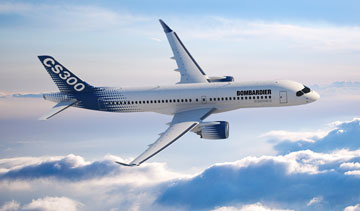 The CS300 is the larger of Bombardier’s two CSeries aircraft. The first CS100 was delivered earlier this month. PHOTO Bombardier

MONTREAL—Bombardier says it has received Transport Canada certification for the larger model of its CSeries passenger jet and the first CS300 will be delivered in the fourth quarter of this year.

The announcement comes as the Montreal-based company joins other industry heavyweights at a major international air show at Farnborough, U.K.—southwest of London.

The smaller CS100 model has previously been certified by Canadian and other aviation authorities and goes into service with Swiss International Air Lines on Friday.

The first CS300 airliner—which can carry more passengers than the CS100—will be delivered to airBaltic of Latvia.

The CSeries program is 2 1/2 years behind schedule and at least $2 billion above cost estimates but the plane and train maker says the aircraft family’s size and fuel efficiency will enable it to operate on routes that were previously not profitable for airlines.

Related Stories
Bombardier hands off first CS300 as questions fly about even larger jet
CSeries on track for certification this year, Bombardier says
Bombardier cuts 2016 CSeries production forecast by more than half
Bombardier delays CSeries deliveries until second half of 2015