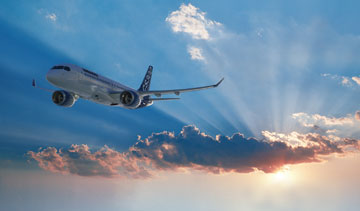 The first of Bombardier’s CS100s are scheduled to be delivered in the first half of next year. PHOTO Bombardier

MONTREAL—Bombardier’s CAE-built full-flight simulator for the new CS100 has been given the regulatory nod by aviation watchdogs in Canada, the U.S. and Europe.

Transport Canada, the U.S. Federal Aviation Administration and the European Aviation Safety Agency have awarded Interim Level C qualification to the full-flight simulator and qualified the training device for the all-new CS100 aircraft.

“Our teams have been working diligently to achieve the qualifications for the CS100 aircraft training devices and we are delighted that the three regulatory authorities approved in quick succession—particularly as we ramp up our customer support activities in preparation for first delivery and entry-into-service in Q2 2016,” Todd Young, vice-president and general manager of Customer Services at Bombardier Commercial Aircraft, said.

The regulators green-lighted the trainer following a final inspection of the simulator at Bombardier’s training centre in Montreal.

“We are honoured that Bombardier has selected us to build the first simulator for the C Series program. By qualifying the first C Series simulator, we ensure Bombardier customers receive the highest fidelity training for its C Series aircraft.”

Bombardier’s CSeries was certified by Transport Canada last week and the first deliveries are scheduled for the in the first half of next year. The company has secured 243 firm orders for the aircraft, as well as 360 further commitments.