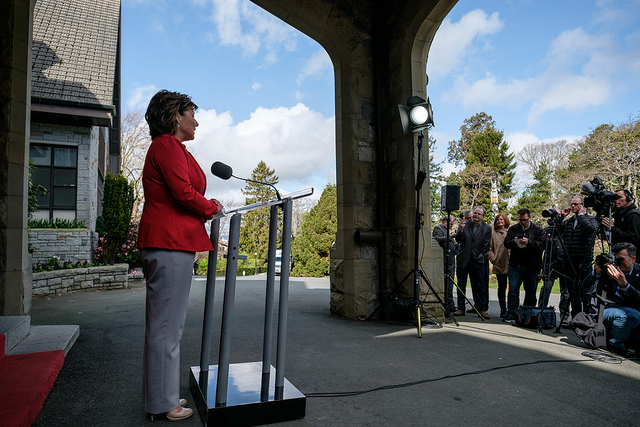 The B.C. premier dissolved parliament this week ahead of the May 9 election. PHOTO: Province of British Columbia/Flickr

VANCOUVER—Andrew Weaver, a respected climate scientist and leader of British Columbia’s Green party, hopes to have something in common with Rachel Notley, Justin Trudeau and even Donald Trump.

All three were dark horse candidates at the outset of elections where they pulled off stunning wins. In the cases of Notley and Trudeau, as well as Yukon Premier Sandy Silver, they were leaders of third parties with only a small fraction of seats.

So when voters in B.C. cast their ballots May 9, Weaver wants to see a historic breakthrough for his party. And he’s setting high stakes: If he’s the only member elected, he’ll ultimately step aside.

“If there is not a whole bunch of Green MLAs in the legislature with me, I will have failed,” he said. “I’ll serve the people of Oak Bay-Gordon Head for four more years and then I won’t run again.”

Weaver was the first Green elected to the province’s legislature four years ago. But the party isn’t merely hoping to pick up a few extra seats this time. They’re running to govern, and they believe this election is coming at a crucial time when voters are especially angry at the status quo.

“We need to have other viable options.”

The Liberals have held power since 2001 and have faced scrutiny over lavish fundraisers and unlimited corporate and union donations. The Opposition NDP also does not limit these types of donations, although it has promised to ban them if elected. The Liberals have committed to convene a panel to review campaign financing.

Campaign manager Taylor Hartrick said since banning big money in September, the party has broken its fundraising records. The party raised $736,667 last year, which doesn’t look like much compared with the Liberals’ $13 million, but it doubled the Greens’ 2015 total.

“There are a lot of voters who are really dissatisfied with the status quo, with the NDP and the Liberals, who are looking for another option to inspire them,” Hartrick said.

For the first time, the Greens are planning to run a full slate of candidates, mount a traditional bus tour and contract their own polling company. Their platform includes promises to more than double the carbon tax over four years while spending $275 million to create clean technology jobs.

Hamish Telford, a University of the Fraser Valley political science professor, said Weaver is likely to keep his seat and the party could pick up an extra riding or two on Vancouver Island. Their best bet is Saanich North and the Islands, where Green candidate Adam Olsen lost by 379 votes in 2013.

But Telford said the age-old story of B.C. politics is that when the centre-right is united, it usually wins. The Liberals are united and it’s in Premier Christy Clark’s interests to play up divisions on the centre-left, he said.

“I think that she would like John Horgan and Andrew Weaver to fight it out on the environment and confuse and divide voters who are concerned about that issue,” he said.

Rob Fleming, a NDP member of the legislature in Victoria-Swan Lake, disputed Weaver’s characterization of his party as lacking in vision. He accused Weaver of focusing more on attacking the NDP than defeating Clark.

“He’s drawn very close to Christy Clark on a number of occasions and she’s certainly utilized him where it suits her political interests,” he said.

Michael Prince, a University of Victoria political scientist, said the Liberals have built up Weaver to weaken support for the NDP. Clark has often praised Weaver and supported several of his private member’s bills, including a recent proposal banning restaurants from requiring staff to wear high heels.

Weaver has, however, spoken out fiercely against Clark’s dream of a liquefied natural gas industry and her party’s position on campaign financing.

Prince said the debate will be crucial. He suggested Weaver take cues from a moment in the 1991 debate, when Social Credit premier Rita Johnson and NDP leader Mike Harcourt loudly bickered and the Liberals’ Gordon Wilson calmly remarked: “Here’s a classic example of why nothing ever gets done in the province of British Columbia.” His popularity soared.

Olsen dismissed the claim that the party splits the centre-left.

“You don’t strengthen democracy by having less of it,” he said. “I think the Greens are very, very useful for democracy and frankly I’m not going to be held accountable for other parties’ inability to be successful.”