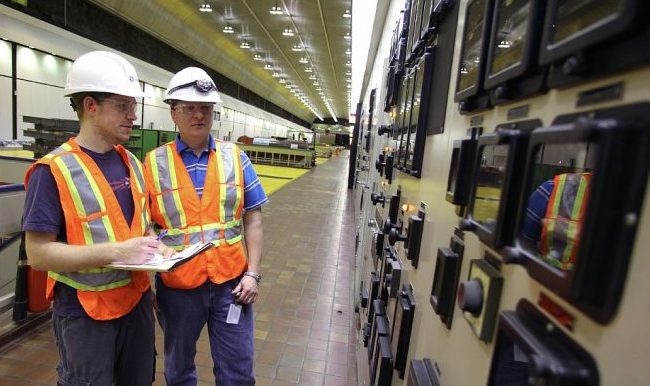 The powerhouse at the Churchill Falls hydro plant. The facility has been a point of contention between Newfoundland and Quebec for decades. PHOTO: Nalcor Energy

ST. JOHN’S, N.L.—Perhaps no one was more cautiously thrilled than Tom Marshall to hear April 20 that Canada’s top court will review the long disputed Churchill Falls hydro deal—a case that could reap big money for a cash-strapped province.

The former premier of Newfoundland and Labrador was justice minister seven years ago when he read a collection of legal opinions. They offered hope that there might be a way to win one of the most bitter political feuds in the country: the fight over wildly lopsided benefits from the Churchill Falls hydroelectric dam and power station in Labrador.

Terms of the 65-year contract signed in 1969 have so far delivered about $27.5 billion for Hydro-Quebec versus $2 billion for Newfoundland and Labrador.

If the Supreme Court of Canada rules the deal should be reopened, it could mean a massive windfall in a province that desperately needs one.

“We’re not asking for the contract to be cancelled,” Marshall said in an interview. “We’re asking the court to order Hydro-Quebec to renegotiate the contract with us and, if they don’t, that the court itself establish a new contract.

“It would give us the fairness that the people of the province have always wanted.”

A spokesman for Hydro-Quebec said Thursday it’s “unfortunate that both parties are devoting so much energy to litigation rather than looking into more constructive avenues.”

“The courts have always found in favour of Hydro-Quebec with respect to its position to uphold the 1969 contract,” Serge Abergel said in an emailed statement.

Under the deal, Hydro-Quebec agreed to buy almost all the energy generated by the hydroelectric plant it financed on the Churchill River in Labrador.

The contract set a fixed price for the energy that would decrease in stages over time.

At issue in this latest legal argument is whether Hydro-Quebec has a “good faith” obligation to take into account how electricity markets have changed since 1969, Marshall said.

“When you have long contracts, in many cases the circumstances that existed when you entered into them have changed, and changed substantially. That’s what happened here.”

The case draws on legal opinions based on civil law in Germany and France, Marshall said.

“We all owe a duty, especially in long contracts, of good faith to each other—not only at the time we started, when we entered into it, but when we execute it over its long term.”

Still, Marshall is realistic about the prospects of the case. Various aspects of the contract have already been argued before the highest court on different legal principles, twice, without success.

“There’s never a guarantee you’re going to win, especially when a new law would have to be made here.”

This most recent court challenge began seven years ago.

Churchill Falls (Labrador) Corp. Ltd.—whose parent company is Crown corporation Nalcor Energy—went to Quebec Superior Court in 2010. It argued, without success, that profits of such magnitude from electricity were unforeseen in 1969 and that Hydro-Quebec had a duty to renegotiate the contract.

The Quebec Court of Appeal upheld the 2014 lower court ruling, agreeing the provincially owned power utility has no obligation to reopen the agreement.

Under the 1969 terms, Hydro-Quebec may purchase the electricity at low prices before reselling it at much higher values on the domestic market and for export.

The legal challenge said the contract was unfair and essentially broken by “unpredictable events” that have transformed energy sales.

But the five Quebec Court of Appeal judges rejected those arguments.

“It is inappropriate to re-examine the parties’ circumstances when they signed the contract,” they ruled. “The uncontradicted evidence establishes that they knew that the price of hydroelectric power was subject to fluctuation but they voluntarily agreed to fix the price.”

The court also found the general principle of “good faith,” as found in Quebec’s civil code, doesn’t apply to Churchill Falls as the contract has remained “profitable” for Newfoundland.

Siobhan Coady, natural resources minister for Newfoundland and Labrador, welcomed news that the Supreme Court of Canada will take another look.

“That would be of tremendous financial benefit,” she said of a potential win. Public spending soared during an offshore oil boom and the province has suffered punishing fiscal hits since prices dropped. It faces years of deficits and escalating net debt.

For now, Coady said the high court hearing, expected sometime in the next year, must play out.

“This has been a very long process.”