"We can't let Canada or anybody else take advantage and do what they did to our workers and to our farmers...it's a disgrace," warned President Trump on April 20 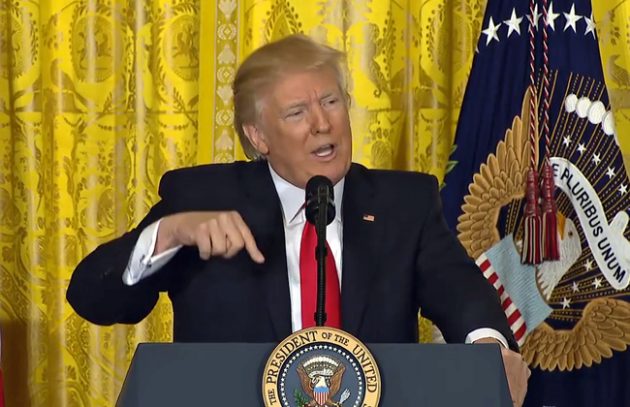 WASHINGTON—Ever since Donald Trump was elected last fall, Canada’s government has been clinging to a strategy of low-drama, under-the-radar conversations about trade that keep investors calm in the choppy waters of a NAFTA renegotiation.

The U.S. president has stopped co-operating.

Trump delivered his strongest-ever broadside at America’s northern neighbour Thursday, piling atop his complaints earlier in the week about Canadian dairy and adding fresh gripes for good measure—this time about energy and lumber.

“We can’t let Canada or anybody else take advantage and do what they did to our workers and to our farmers,” Trump said in the Oval Office.

“Included in there is lumber, timber and energy. We’re going to have to get to the negotiating table with Canada very, very quickly.”

This is the same president who recently played down irritants with Canada—he said he just wanted to do a little trade tweaking. Suddenly, he’s tweaking Canada’s nose—twice in a week, with his second twist even more forceful than the first.

Canadians will soon learn whether it’s just pre-negotiation bluster or a harbinger of hardball: Trump promised more details within a couple of weeks about his government’s plans for the North American Free Trade Agreement, with discussions likely to start later this year.

He provided no rationale for his complaints.

On energy, Canada provides the U.S. more than one-third of its oil imports—and does so under a stable, locked-in ratio guaranteed in NAFTA. On lumber, cheaper Canadian wood has reduced the cost of U.S. homes but also caused recurring legal spats with the U.S. industry that alleges product-dumping.

‘It’s a disgrace’
On dairy, he offered a scintilla of detail.

Trump made it obvious his complaints from earlier this week in Wisconsin were specifically about recent rule changes on milk classification, not on the longer-term issue of Canada’s supply-management system.

“Canada, what they’ve done to our dairy farm workers, is a disgrace. It’s a disgrace,” he said. “Rules, regulations, different things have changed—and our farmers in Wisconsin and New York state are being put out of business.”

It was a far cry from the tune Trump was singing in February.

After meeting Prime Minister Justin Trudeau, he lauded the bilateral trade relationship, saying it required only tweaking. He told people he was pleased with the meeting, and even gave Trudeau a friendly shout-out in his prime-time speech to Congress.

In an interview Thursday with Bloomberg, the prime minister sounded resigned to a future filled with presidential mood swings.

Asked about Trump’s remarks earlier in the week about dairy, Trudeau acknowledged the likelihood that the message from the White House might occasionally switch from one day to the next.

Indeed, he actually cast the topsy-turvy messaging as a positive thing. He called it an opportunity—a sign the president listens to the people he speaks with, and keeps an open mind to changing his views.

“(Trump is) a little bit unlike many politicians,” the prime minister said, acknowledging the magnitude of his understatement amid laughter from the crowd.

“As politicians we’re very much trained to say something and stick with it. Whereas he has shown if he says one thing and then actually hears good counter-arguments or good reasons why he should shift his position, he will take a different position if it’s a better one, if the arguments win him over.

“I think there’s a challenge in that for electors, but there’s also an opportunity in that for people who engage with him.”

Canada has ample reasons to engage
U.S. policy-makers have decisions to make that will affect the northern neighbour on multiple fronts including: NAFTA, softwood lumber, the possibility of a U.S. import tax, and Buy American rules.

Already the uncertainty has caused some businesses to pause investments in Canada, according to the Bank of Canada.

In an effort to soothe those concerns, the Canadian government repeatedly portrays NAFTA negotiations as no big deal, just another adjustment to an agreement adjusted several times already.

While Trump’s “America First” attitude has yet to show up in any successful legislation, it has appeared in numerous executive actions, including the order he was signing in his office Thursday as he complained about Canada.

That order sets a timeline for his administration to study possible tariffs on foreign steel. Ironically, one of Trump’s guests in his office for the signing ceremony was the head of the United Steelworkers union—Leo Gerard, a Canadian, born in Sudbury, Ont.

Trump’s gripes about Canada came at the end of his remarks about steel. He prefaced them by saying, “I wasn’t going to do this,” then launched into complaints about Canadian dairy, wood, and energy and its impact on the U.S.

On dairy, Freeland said, Canada buys five times more than it sells to the U.S.; on lumber, Canadian producers have always prevailed in past court cases, and a protracted dispute would only drive up U.S. housing costs.

And as for oil, she described the stable supply from Canada as a job-creating lifeblood of the U.S. economy.

“Our government will always defend Canada’s interests,” she said.

“Any increase of trade barriers between our countries would significantly impact jobs in the United States, as well as in Canada.”