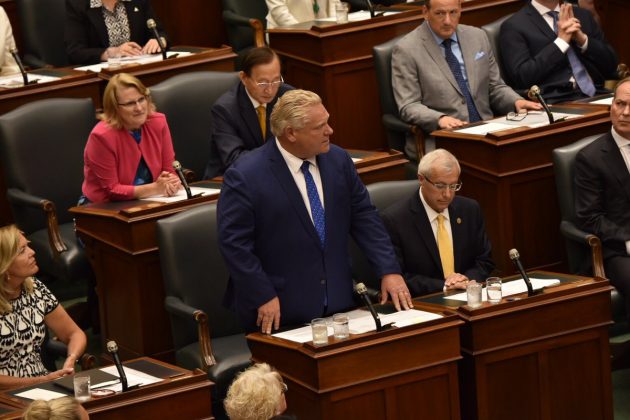 TORONTO—Doug Ford is bringing the same kind of chaos that defined his tenure at Toronto city hall to the Ontario legislature, the province’s opposition parties suggested Tuesday as flaring tensions derailed debate over a controversial government proposal.

Discussions over a government bill that would slash Toronto city council by 22 seats just over two months before a municipal election came to a halt when a shouting match erupted between the recently elected premier and NDP Leader Andrea Horwath, prompting the Speaker to recess the legislature.

Ford and his caucus alleged NDP House Leader Gilles Bisson mocked the accent of Progressive Conservative legislator Kaleed Rasheed as he was speaking in the house, an accusation Bisson and Horwath vehemently denied.

The Speaker said he did not hear the alleged comments but the Tories vowed not to answer any questions from the Opposition until Bisson apologized.

The New Democrats, meanwhile, said the move was simply an attempt to change the conversation from the controversial proposed legislation, which the City of Toronto has formally denounced.

The incident led all parties to condemn what they called the toxic tone of the legislature while blaming their opponents for the lapse in decorum.

“It’s a very toxic environment in there,” said Tory House Leader Todd Smith. “I understand that some things are contentious that we’re debating. However, there has to be that respect for the members of the legislature, and mocking somebody for their accent or where they came from is completely unacceptable for any member of the legislature.”

The NDP and Liberals suggested Ford—a former Toronto city councillor whose single term in office was marked by controversy—was largely responsible for the shift.

“What happened in there today, you all witnessed it, you all saw. I mean, it’s not a revelation. We know who he is, past behaviour is the best predictor of future behaviour,” he said.

During his time in council, Ford served as right-hand man to his late brother, the former Toronto mayor Rob Ford, whose struggles with substance abuse led him to be stripped of most of his power. Doug Ford also heckled opponents during council meetings and was in a public feud with the city’s then-police chief until he issued an apology.

Critics have suggested the proposed legislation is simply the premier’s attempt to retaliate against his political foes. Ford said the move is meant to streamline decision-making and save $25 million in salaries.

The bill was introduced Monday just hours before city council voted to voice its opposition and request that the issue be put to a referendum.

The minister of municipal affairs, Steve Clark, said during question period that a special referendum could cost up to $8 million.

“Here’s a question I’d like to ask taxpayers. Would they rather spend $7 million to $8 million on a referendum asking if you should keep more politicians or would you rather save $25 million and save that money on politicians? … I think I know the answer to that question,” he said.

The NDP moved an amendment to the motion for second reading of the bill on Tuesday, which they said means debate and thus passage of the legislation will be delayed for two days.