Chief executive Pierre Beaudoin says sanctions are digging in to business aircraft sales, but other business lines and negotiations to build a Q400 assembly plant in Russia remain on track 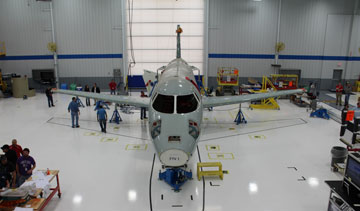 MONTREAL—Bombardier says a Russian economy weakened by Western sanctions is having an effect on business aircraft sales, but has not undermined negotiations to establish a turboprop manufacturing facility or threatened a large CSeries order from a Russian leasing company.

“So far everything is still going, maybe except for business aircraft,” CEO Pierre Beaudoin said Thursday during a conference call to discuss second-quarter financial results.

“The market is weak in Russia right now and you can imagine that if the economy slows down it has an effect, but I think it’s a situation that we need to follow very closely.”

Bombardier reported that its overall revenues increased about nine per cent adjusting for currency to US$4.9 billion, but its net income decreased 14 per cent due to softness at its railway division.

The Montreal train and plane maker, which keeps it books in U.S. dollars, earned $155 million or eight cents per share for the three months ended June 30. That compared to $180 million, or 10 cents per share, for the same quarter in 2013.

Analysts expected nine cents in adjusted earnings per share on $4.73 billion in revenues, according to data compiled by Thomson Reuters.

Beaudoin said negotiations continue with Rostec about setting up a Q400 assembly plant in Russia, with both sides motivated to find a solution.

“Of course when and if we get to an agreement we will have to consider the overall environment and the sanctions at that time,” he said. “Today I don’t see that as a restriction but it’s a situation that evolves.”

Beaudoin added that Russian leasing company Ilyushin Finance’s firm order for 32 CS300 and options for 10 more aircraft is not compromised by the political situation in Russia since the larger CSeries plane isn’t scheduled to enter into service until later in 2016.

Meanwhile, the aerospace manufacturer said it hopes to make up some lost flight hours caused by a two-month grounding of the commercial jet after flight tests resume “within weeks.” The test program requires 2,400 flight test hours, but Bombardier hopes to get credit for some of its ground testing.

New engines have been installed on one flight test aircraft and Bombardier is reviewing a solution provided by Pratt & Whitney to resolve the engine mishap.

“We still feel confident that we’re within the window that we gave you (for entry into service), which is the second half of 2015,” he told analysts.

Beaudoin said customers have expressed confidence in the performance of the 110- to 160-seat CSeries plane despite being disappointed by the engine problem.

Bombardier has used the lull in flight testing to install component and software updates and will fly in “normal mode” using its fly-by-wire computer system when flights resume.