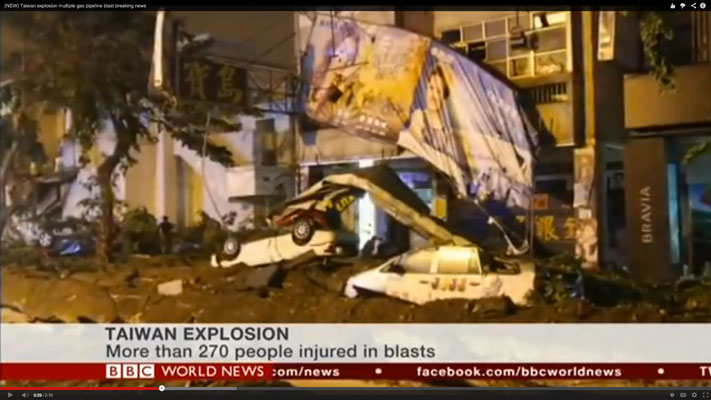 Screen capture of a news report covering pipeline explosions in Kaohsiung, Taiwan. Scroll to the bottom of this page for video

KAOHSIUNG, Taiwan—Heavy machinery pulled vehicles from huge trenches gouged by explosions along an underground pipeline in Taiwan’s second-largest city that killed at least 25 people and injured 267.

The series of five explosions from about midnight Thursday to early Friday struck a densely populated industrial district in the port of Kaohsiung where petrochemical companies operate pipelines alongside the sewer system under city streets. The cause of the disaster was being investigated.

Four firefighters were among the victims when the blasts went off hours after they’d been called to investigate gas leaks. At least six fire trucks were flung into the rubble. The blasts sent flames shooting into the sky and hurled concrete and cars through the air, leaving meter-deep trenches down the middle of several roads.

Three people remained missing and many of the injured were still receiving emergency treatment. The disaster was Taiwan’s second in as many weeks following the crash of a TransAsia Airways prop jet on the island of Penghu on July 23 that killed 48 people and injured 10.

The explosions were believed caused by leaking propene, a petrochemical material not intended for public use, said Chang Jia-juch, director of the Central Disaster Emergency Operation Center. Chang said the cause and location of the leaks were unknown.

The exploded gas line belongs to government-owned CPC Corp., which told The Associated Press there were no signs of problems before the explosions.

The government’s disaster response centre said it was trying to prevent secondary explosions. Some fires burned into midday Friday.

“In terms of what we can prevent, we’re afraid another explosion could happen, as there is that possibility,” said Hsu Lee-hao, a Ministry of Economic Affairs section chief staffing the disaster response centre.

Many of the dead and injured had been outside near a night market and were hit by flying rubble or cars, a police officer at the scene said. Police and firefighters suffered burns while trying to control blazes.

Power supplies to 12,000 people in the area were severed, and 23,600 lost gas service. More than 1,100 people were evacuated overnight and the worst-affected areas were sealed off.

Backhoes pulled upended fire trucks and other vehicles from the rubble. Paramedics with rescue dogs combed the neighbourhood for survivors.

Police officers and firefighters had investigated a gas leak on Kaixuan Road reported at 8:46 p.m. Thursday, but were unable to identify the source. They were closest to the fire during the initial midnight explosion, and many suffered burns.

Large trenches ran down the centre of four of the hardest-hit roads, edged with pavement slabs torn apart by the blasts. Burned walls and toppled shop signs lined Sanduo Road, near an elementary school.