Egg Farmers of Canada announced plans to eliminate the small enclosures by 2036, but a new regulation could forces farmers to move more quickly 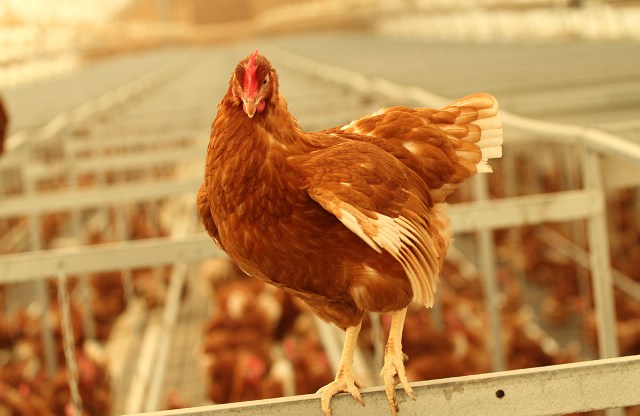 The new rule, proposed by the National Farm Animal Care Council, would move up the phase-out of battery cages by five years. PHOTO: World Animal Protection

EDMONTON—The Canadian Federation of Humane Societies says proposed new rules for farms could speed up a ban on the use of small, cramped cages for egg-laying hens.

Last February, the group Egg Farmers of Canada announced the use of these cages would be phased out by 2036.

The federation says a new draft code of practice issued by the National Farm Animal Care Council sets a 2031 deadline, and says no more of the small cages can be built starting next year.

The draft said it expects that half of all egg-laying hens will be out of these types of cages within eight years.

Barb Cartwright, CEO of the federation, said such cages are cruel.

“The birds are packed into tiny spaces. They can’t move their wings or move around. It is a very miserable life,” she said June 30.

“Moving away as quickly as possible from those caging systems is important.”

The draft also includes standards for cage-free egg production to ensure hens will live in humane conditions, including a place to nest, space to move, perch and forage for food.

The council’s website says people have 60 days to comment on the draft, which could be revised before the new code is released.

Egg Farmers of Canada, which represents 1,000 regulated egg-producing farms across the country, said it is reviewing the draft code and will make a submission to the council during the comment period.

Peter Clarke, the group’s chairman, said the farms are responsible for than 90 per cent of Canada’s egg production.

He said producers want to supply consumers with the type of eggs they want, but making the transition won’t be simple.

The proposed changes to the code don’t go far enough for the Humane Society International/Canada, which wants the egg industry to be completely cage-free.

Sayara Thurston, a society spokeswoman, said the proposed code would allow cages that are less than double the size of the existing standard.

Thurston said producers need only look at the number of grocery store and restaurant chains that have pledged to source all of the eggs they need from cage-free producers.

In May, Retail Council of Canada grocery members including Loblaw Companies Limited, Metro Inc., the Overwaitea Food Group, Save-On-Foods, Sobeys Inc., and Wal-Mart Canada Corp., announced they plan to purchase cage-free eggs by the end of 2025.

“Really, what we are looking at is a code of practice that doesn’t go far enough, fast enough and is letting down consumers, producers and animals,” she said.

Cartwright urged Canadians who care about animal welfare to make submissions to the council about the code before the Aug. 29 deadline.


Related Stories
Cramped cages for chickens to be phased out in Canada
Egg farmers begin huge shift to cage-free production as industry pressure mounts
Rembrandt, one of the U.S.’s largest egg producers to build huge cage-free farm
Ikea Canada to serve up only cage-free eggs