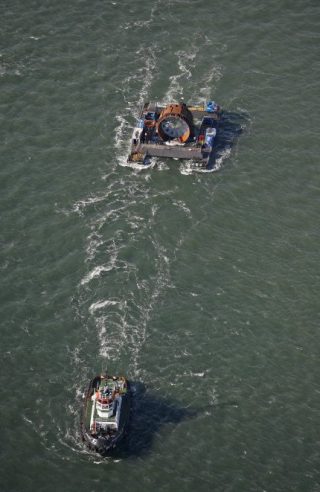 Tugboats pulling a the previous generation of OpenHydro’s turbine into position off the Nova Scotia coast. PHOTO: CNS/Len Wagg

HALIFAX—One of the giant turbines destined for the Bay of Fundy will be hauled by barge to Halifax for final preparations in the coming days, however, exactly when it will be installed is still unknown.

In a statement, Sarah Dawson of Cape Sharp Tidal said the plan to install two 1,000-tonne turbines in the Minas Passage remains on hold indefinitely after getting the go-ahead from Nova Scotia’s environment minister.

The turbine will be moved to Halifax for ballasting work and final inspections, she said. The operation will create more room at the shipyard in Pictou, N.S., to finish assembling the second turbine.

One of the five-storey high turbines was scheduled to be transported to a test location near Parrsboro in June.

Environment Minister Margaret Miller put the project on hold early last month, saying the province had yet to approve a proposed environmental effects monitoring program, but allowed it to proceed a little more than a week ago.

According to Dawson, Cape Sharp chose to delay the project to further consult with various stakeholders who feel they haven’t been heard.

She said among those being consulted are local fishers who have voiced strong opposition to the project over concerns that the instream tidal turbines can’t be made safe for the ecosystem.

“We’ve spoken to many fishers over the past weeks and months—and in fact years,” she said. “Like everyone who has an interest in the Bay of Fundy, we believe that a number of industries and interests can co-exist responsibly.”

The company, a partnership of OpenHydro and Emera, is one of several who plan to test different turbine technology in the Bay of Fundy.