February 14, 2017  by Ian Bickis and Andy Blatchford, The Canadian Press 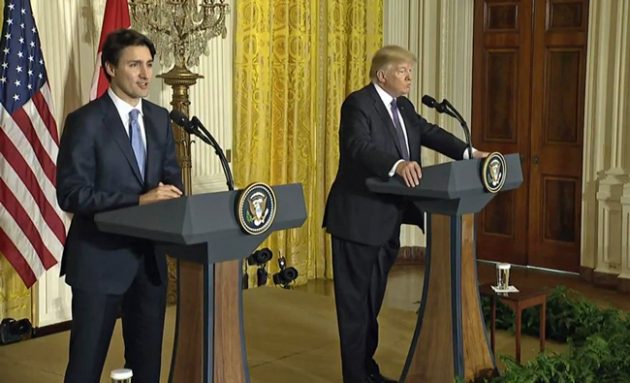 From the forestry industry to the automotive sector to the oilpatch, corporate Canada kept a close eye on the first one-on-one meeting between the two leaders, parsing every word for clues on the future of trade between the two countries.

The president of the Automotive Parts Manufacturers’ Association, which represents companies that are acutely integrated across North America, said Trump’s comments were a welcome affirmation of what he’s been quietly hearing from U.S. officials over the last couple of months.

“We were pleasantly surprised that the president would have used as many superlatives when discussing his view on Canada as a trading partner,” Flavio Volpe said.

Volpe said that going forward, he’ll be emphasizing how much American consumers have benefited from one of the most integrated industries in the world.

Dennis Darby, CEO of the Canadian Manufacturers & Exporters, said he was pleased to hear trade become a focal point of Trudeau’s meeting with Trump, including specific commitments by both countries to establish pre-clearance operations for cargo.

Darby said he believes upcoming Canadian-U.S. negotiations on trade and other cross-border business issues are now getting off on the right foot.

“I think Canada will need to be vigilant about protecting our interests, as the U.S. will be as well. But it sounds much more positive than at least some of the commentary in the recent past,” he said.

Derek Nighbor, CEO of the Forest Products Association of Canada, said he was encouraged to hear Trump would only be “tweaking” NAFTA and is more focused on trade issues with Mexico.

Nighbor said all industries in Canada are looking to remind the U.S. of the importance of the current trade relationship and he was pleased to see Trudeau deliver a similar message in Washington.

A joint statement released by Canada and the U.S. affirmed the “profound shared economic interests” between the two countries and the US$2 billion in two-way trade flowing across the border daily.

Tim McMillan, head of the Canadian Association of Petroleum Producers, said it was a good signal for the TransCanada project.

“To see it as one of the specific mentions, it really reaffirms that this is a priority for the new administration, and it’s a priority here in Canada,” said McMillan.

He said it was positive that the importance of the environment was mentioned along with energy, but that Canada will have to be conscious of how regulations play out in the U.S.

Avery Shenfeld, chief economist at CIBC Capital Markets, said in a note to clients that Trump’s comments on NAFTA should offer some comfort to Canadian economy watchers.

Shenfeld did, however, point out that the issue of a border tax on imports to the U.S., which could prove disruptive to a wide range of industries, was not covered.

Focus now on CETA
Business leaders are now hoping for a second wave of positive news out of Europe as Prime Minister Justin Trudeau travels across the Atlantic later this week.

Trudeau’s visit is expected to coincide with the European Union’s ratification vote on its free-trade deal with Canada, an agreement nearly scuttled last fall due to opposition from a small region in Belgium.

“The prime minister is now off to hopefully put (the Canada-EU free trade deal) in his pocket and bring it home from Europe, which would also be good news,” John Manley, the president of the Business Council of Canada, said in an interview.

The deal will still need the approval of the EU’s 28 national parliaments as well as some regional governments. But 90 per cent of the deal is expected to come into force under what is known as provisional application.